Cantor's diagonal argument is a mathematical method to prove that two infinite sets have the same cardinality. Cantor published articles on it in 1877, 1891 and 1899. His first proof of the diagonal argument was published in 1890 in the journal of the German Mathematical Society (Deutsche Mathematiker-Vereinigung). According to Cantor, two sets have the same cardinality, if it is possible to associate an element from the second set to each element of the first set, and to associate an element of the first set to each element of the second set. This statement works well for sets with a finite number of elements. It is less intuitive for sets with an infinite number of elements.

The example below uses two of the simplest infinite sets, that of natural numbers, and that of positive fractions. The idea is to show that both of these sets,

have the same cardinality.

First, the fractions are aligned in an array, as follows: 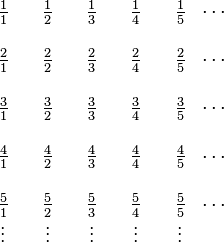 Next, the numbers are counted, as shown. Fractions which can be simplified are left out: 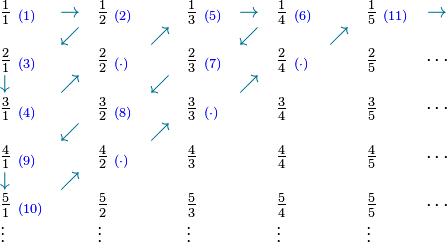 That way, the fractions are counted:

To show that all natural numbers and the fractions have the same cardinality, the element 0 needs to be added; after each fraction its negative is added;

Infinite sets often have properties which go against intuition: David Hilbert showed this in an experiment which is called Hilbert's paradox of the Grand Hotel.

The set of real numbers does not have the same cardinality than those of the natural numbers; there are more real numbers than natural numbers. The idea outlined above influenced his proof. In his 1891 article, Cantor considered the set T of all infinite sequences of binary digits (i.e. each digit is zero or one).

He begins with a constructive proof of the following theorem:

If s1, s2, … , sn, … is any enumeration of elements from T, then there is always an element s of T which corresponds to no sn in the enumeration.

To prove this, given an enumeration of elements from T, like e.g.

By construction, s differs from each sn, since their nth digits differ (highlighted in the example). Hence, s cannot occur in the enumeration.

Based on this theorem, Cantor then uses a proof by contradiction to show that:

The set T is uncountable.

He assumes for contradiction that T was countable. In that case, all its elements could be written as an enumeration s1, s2, … , sn, … . Applying the previous theorem to this enumeration would produce a sequence s not belonging to the enumeration. However, s was an element of T and should therefore be in the enumeration. This contradicts the original assumption, so T must be uncountable.

All content from Kiddle encyclopedia articles (including the article images and facts) can be freely used under Attribution-ShareAlike license, unless stated otherwise. Cite this article:
Cantor's diagonal argument Facts for Kids. Kiddle Encyclopedia.