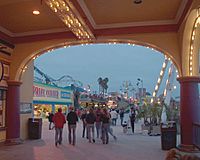 Late evening at the Boardwalk

The Santa Cruz Beach Boardwalk is an oceanfront amusement park in Santa Cruz, California. Founded in 1907, it is California's oldest surviving amusement park and one of the few seaside parks on the West Coast of the United States. 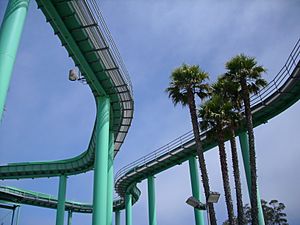 The underside of the Logger's Revenge, a log flume at the Boardwalk

The Boardwalk extends along the coast of the Monterey Bay, from just east of the Santa Cruz Municipal Wharf to the mouth of the San Lorenzo River. At the western edge of the park lies a large building originally known as The Plunge, Now Neptune's Kingdom, A Pirate-themed recreation center which contains a video arcade, and indoor miniature golf course. Next to this is The Casino Fun Center which includes a laser tag arena and next to that (To the Right) is The Cocoanut Grove banquet room and conference center. A Laffing Sal automated character, from San Francisco's Playland, is viewable near the miniature golf course.

East of the Casino, the boardwalk portion of the park stretches along a wide, sandy beach visitors can access easily from the park. The eastern end of the boardwalk is dominated by the Giant Dipper roller coaster, one of the best-known wooden coasters in the world and one of the most visible landmarks in Santa Cruz. The Dipper and the Looff Carousel, which still contains its original 342-pipe organ built in 1894, are both on the US National Register of Historic Places. They were, together, declared to be a National Historic Landmark in 1987 and the park is California Historical Landmark number 983.

As of 2011[update], the park is headed by Charles Canfield, the son of Laurence Canfield, the president of the park from the 1950s through the early 1980s. It has won the Best Seaside Amusement Park Award from Amusement Today in 2007, 2008, and 2009. Although there is no admission and the beach is public, parking is charged a fee when the rides are open. Season or day passes can be purchased or tickets for one dollar; rides take 3 to 6 tickets each.

The Cocoanut Grove conference center includes banquet rooms and a performing arts venue at the Santa Cruz Beach Boardwalk. Food, drink, and theater were profitable aspects of the resort since the original Casino of Swanton in 1904. Although gambling was never legal, it was generally known that guests could take boats from the "pleasure pier" to a ship in the harbor to play games of chance in the early days. During Prohibition in the 1930s, serving alcoholic drinks was also outlawed and the Casino changed its name to Cocoanut Grove. The name includes an old spelling of Coconut, Cocos nucifera, which was used in the popular Marx Brothers movie The Cocoanuts of 1929. The name was also used by a number of popular nightclubs of the era, including one in The Ambassador Hotel in Los Angeles, California.

In the 1930s and 1940s, the Grove was a popular spot for major big band acts, including Stan Kenton, Benny Goodman, Lionel Hampton and Tommy Dorsey.

Today, the Grove rarely hosts musical acts. It is a venue for weddings, banquets, school formal occasions and reunions, and corporate events. The Grand Ballroom and Sun Room complexes include over 20,000 square feet (1,900 m2) of space and commercial kitchens.

All content from Kiddle encyclopedia articles (including the article images and facts) can be freely used under Attribution-ShareAlike license, unless stated otherwise. Cite this article:
Santa Cruz Beach Boardwalk Facts for Kids. Kiddle Encyclopedia.