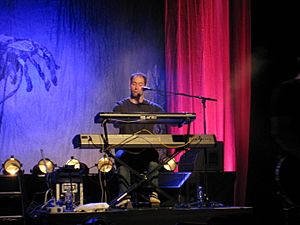 The use of electronic keyboards grew in popularity throughout the 1960s, with many bands using the Hammond organ, Mellotron, and electric pianos such as the Fender Rhodes. The Doors became the first group to use the Moog synthesizer on a pop record on 1967's "Strange Days". Other bands, including The Moody Blues, The Rolling Stones, and The Beatles would go on to add it to their records, both to provide sound effects and as a musical instrument in its own right.

Keyboardists are often highly sought after in cover bands, to replicate the original keyboard parts and other instrumental parts such as strings or horns where it would be logistically difficult to hire people to play the actual instruments.

All content from Kiddle encyclopedia articles (including the article images and facts) can be freely used under Attribution-ShareAlike license, unless stated otherwise. Cite this article:
Keyboardist Facts for Kids. Kiddle Encyclopedia.