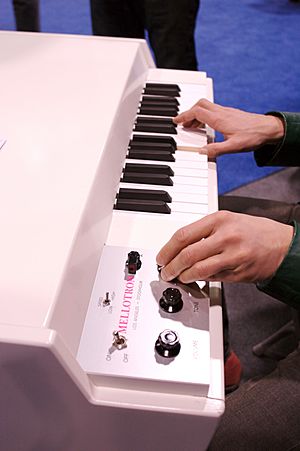 Mellotrons did not travel well, and had to be carefully set up every time they were moved. They became popular in recording studios, and with musicians who could leave them in one location.

The Beatles liked the sound of the Mellotron, and used it in many of their songs, like "Strawberry Fields Forever". John Lennon, a member of the Beatles, owned a Mellotron that he kept in his home studio. Paul McCartney and George Harrison, also members of the band, owned Mellotrons and used them in their solo recordings. Harry Nilsson also used a Mellotron on some of his recordings.

Mellotrons are largely obsolete but are still being made in small quantities. Today, digital instruments have mostly taken their place. Digital keyboards are portable, and can be used to make similar sounds anywhere. While digital keyboards have been used since the 1980's to replicate the sounds of many other instruments, they cannot accurately replicate the nuances and idiosyncrasies of the Mellotron because of complex physics involved in the tape playback system. This acknowledged drawback has led to the production of new Mellotrons since 1999.

All content from Kiddle encyclopedia articles (including the article images and facts) can be freely used under Attribution-ShareAlike license, unless stated otherwise. Cite this article:
Mellotron Facts for Kids. Kiddle Encyclopedia.