Aptos is a census-designated place (CDP) in Santa Cruz County, California, United States. The population was 6,220 at the 2010 census. Aptos is bisected northwest-to-southeast by the State Route 1 freeway.

Aptos is also an unincorporated town defined by ZIP codes 95001 and 95003. The town includes several small communities with a combined population of 24,402:

According to the United States Census Bureau, the CDP has a total area of 6.4 square miles (17 km2), all of it land. The southwestern geographical boundary is Monterey Bay, while the northeast boundary is the Santa Cruz Mountains.

The name Aptos is Ohlone, meaning "the people". Aptos was traditionally inhabited by the Ohlone Awaswas people. The name is one of only three native words that have survived (in Hispanicized form) as place names in Santa Cruz County (the others are Soquel and Zayante).

The first European land exploration of Alta California, the Spanish Portolà expedition, passed through the area on its way north, camping at one of the creeks on October 16, 1769. The expedition diaries don't provide enough information to be sure which creek it was, but the direction of travel was northwest, parallel to the coast. Franciscan missionary Juan Crespi, traveling with the expedition, noted in his diary that, "We stopped on the bank of a small stream, which has about four varas of deep running water. It has on its banks a good growth of cottonwoods and alders; on account of the depth at which it runs it may be that it cannot be utilized to water some plains through which it runs." Crespi diary translator Herbert Bolton speculated that the location was Soquel Creek, but it could have been Aptos Creek.

In 1833 the government of Mexico granted Rafael Castro the 6,656-acre (26.94 km2) Rancho Aptos. Initially Castro raised cattle for their hides, but after California became a state in 1850, Castro leased his land to Americans who built a wharf, general store, and lumber mill. The original town was located where Aptos Village Square is now. In 1853 a leather tannery was built, and the main building is a bed & breakfast inn. 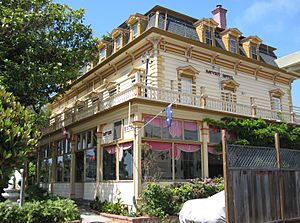 In 1878 Augustia Castro, daughter of Rafael Castro, and her husband Jose Arano built the Victorian, Bayview Hotel in Aptos village. The hotel is a Santa Cruz County landmark. It is Santa Cruz county's oldest operating hotel. It has been a State Historic Monument since 1974 and listed on the National Register of Historic Places since 1993.

In the mid to late 1800s, a series of major epidemics hit the area. A particularly bad one occurred in the early winter of 1868. Cases of smallpox were reported among the poor of San Juan Bautista. Efforts were made to localize the rapidly spreading disease, such as, barricading the roads leading in and out of San Juan Bautista. These efforts failed however, and when cases appeared in Watsonville, Santa Cruz citizens attempted to again quarantine the disease by destroying the Aptos Bridge. These efforts again failed and only created a rift between the two cities. The death toll of the smallpox epidemic lead to the local press publishing of the latest remedies available for home use as well as methods to prevent the spread of smallpox and inoculations.

By 1872, Claus Spreckels, the sugar millionaire, began buying the land from Castro. He built a hotel near the beach and a summer mansion and ranch with a racetrack for his horses. A large area was fenced and stocked with deer for hunting, and became known as "the Deer Park," home of today's Deer Park Center. With the coming of the railroad, the town moved to the other side of Aptos Creek.

From 1880 to 1920 redwood timber harvesting became the major industry, and Aptos became a boom town. The Loma Prieta Lumber Company logged all of what is now The Forest of Nisene Marks State Park. The Valencia Mill logged everything to the east. Within 40 years the hills were bare, and apples became the next industry. The Hihn Apple Barn is a historic building from that era; in 2016, the building was in the processing of being relocated nearby to make way for a shopping complex.

On March 16–20, 1905, the Leonard Ranch near La Selva was the site of experiments with a new tandem-wing glider designed and built by John J. Montgomery. Hoisted aloft by hot-air balloon to considerable heights, over a series of test flights pilot Daniel J. Maloney was able to demonstrate the control and flight of the Montgomery glider design. These flights, with starting altitudes over 3,000 feet above the ground, were the first high-altitude flights in the world. A marker was placed at this location in 2005 honoring the cenntenial of these accomplishments.

After Spreckels' death, Seacliff Park and Rio Del Mar Country Club (today's Seacliff State Beach) were developed in the late 1920s. Rio Del Mar Country Club included a clubhouse, a grand hotel on the bluffs, a beach club, a polo field, and a golf course. The estuary was filled in (now Rio Beach Flats,) and the SS Palo Alto cement ship was moored and converted into an amusement pier with restaurants, swimming pool, and a dance pavilion. Both Rio Del Mar and Seacliff were popular during Prohibition as drinking and gambling were discreetly available. These amusements were interrupted by the Great Depression and World War II. 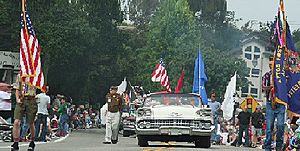 The census reported that 98.7% of the population lived in households and 1.3% lived in non-institutionalized group quarters.

There were 4,055 households out of which 25.8% had children under the age of 18 living with them, 48.1% were married couples living together, 8.1% had a female householder with no husband present, and 40.1% were non-families. 27.5% of all households were made up of individuals and 8.2% had someone living alone who was 65 years of age or older. The average household size was 2.29 and the average family size was 2.78. 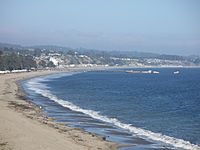 Aptos is home to both the Forest of Nisene Marks State Park and Seacliff State Beach California state parks. Nisene Marks is popular with hikers and mountain bikers. The San Andreas Fault Zone passes nearby and the epicenter of the M6.9 1989 Loma Prieta earthquake lies within.

Many Aptos beaches are popular spots for surfing and bodyboarding. Aptos is also a popular spot for Freeride biking and street skateboarding. Efforts have gone towards attempting to build a skate park in Aptos, however it appears likely at this point.

The beaches of Aptos are frequented by a small but dedicated group of surfers.

Aptos is also home to the annual Fourth of July "World's Shortest Parade," so called because the parade route is about .6 miles long.

All content from Kiddle encyclopedia articles (including the article images and facts) can be freely used under Attribution-ShareAlike license, unless stated otherwise. Cite this article:
Aptos, California Facts for Kids. Kiddle Encyclopedia.