Live Oak is a census-designated place (CDP) in Santa Cruz County, California between the towns of Santa Cruz and Capitola. Live Oak sits at an elevation of 102 feet (31 m). The population was 17,158 at the 2010 census.

According to the United States Census Bureau, the CDP has a total area of 3.2 square miles (8.4 km²), all of it land. 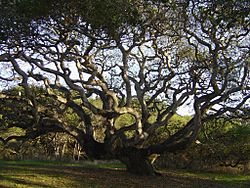 For several thousand years, the Awaswas-speaking Ohlone people inhabited the area from Half Moon Bay to Aptos, including the area now known as Live Oak. When missionaries established the Mission Santa Cruz in 1791, they noted "an area to the east of the San Lorenzo River "in sight of the Sea" that was crisscrossed by "steep gulches containing running water" and three "reed-lined" lagoons. Spanish colonial settlers, who later established the secular pueblo of Villa de Branciforte on the east side of the San Lorenzo, ran their herds of cattle and horses in the "common lands" of this area.

In 1834 and 1836, territorial governors divided these lands among two rancheros, the brothers Alejandro and Francisco Rodriguez. Alejandro Rodriguez was granted Rancho Arroyo del Rodeo, because of the three sizeable estuaries lying within its boundaries (now known as Twin Lakes and the Santa Cruz Harbor). 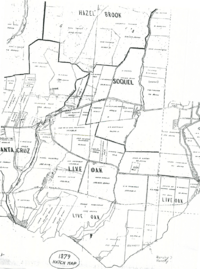 Map of farm properties in Live Oak and environs, 1879.

With the discovery of gold in California in 1848 and American statehood in 1849, legal maneuvering turned the Rodriguez brothers' holdings over to a handful of white settler-farmers. Their farms produced wheat, oats, and barley, supporting small households of adobe and rough-cut lumber. The farmers prospered, establishing a Grange Hall and, in 1872, a small schoolhouse called the "Live Oak School", named for the evergreen live oak trees that dot the area. The Live Oak School District has maintained a facility at this location, now the intersection of 17th Avenue and Capitola Road, to the present day.

By the start of the 20th century, fifty years of wheat and oat farming had depleted the soil such that farmers turned to cultivating fruits and vegetables. Owing to the irrigation needs of these crops, these farms eventually failed and were replaced by a large poultry operation near the present-day intersection of Capitola Road and Soquel Drive, and a floriculture bulb nursery (specializing in callas, narcissus, freesias and begonias) near the present-day intersection of 17th Avenue and East Cliff Drive.

Around 1910, two Santa Cruz real estate agents, the brothers Frank and David Wilson, purchased and subdivided several of the old 19th century wheat farms. The new lots were long and narrow, normally of 2.5 acres (1.0 ha), and came with a "poultry unit" that included a kit for a two-bedroom house, and one or two large chicken coops stocked with a flock of 500 or 1,000 hens and roosters. The layout and shape of these lots has left a distinctive mark on the area's subsequent development. A feed mill to serve the area soon followed.

Egg and poultry prices plummeted in the early years of the Great Depression, and this difficulty was compounded by a double plague of Pullorum Disease and Coccidiosis, which swept through the chicken coops of Live Oak in 1931.

Paved roads and utilities were brought to the area during the 1940s, which also saw the incorporation of Capitola to the east. Bulb nurseries, particularly those specializing in begonias, thrived throughout this period and into the 1950s, when the area was beginning to develop into a residential suburb of Santa Cruz. The west-to-east serial numbering of Live Oak's north-south streets during that period reflected the expectation that the area would soon be annexed to the city of Santa Cruz. Annexation never came, and a movement for Live Oak to incorporate itself as a municipality was abandoned too, in light of the expense of providing the needed services to the area. In the 1970s, Capitola expanded westward, incorporating the tax-rich commercial neighborhood along 41st Avenue. Residential and commercial development in Live Oak continued at a steady pace, under the direction of Santa Cruz County. 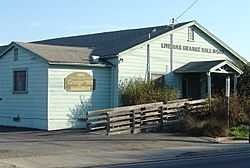 Sporadic infill development in Live Oak over the last half century has contributed to the area's eclectic patchwork of trailer parks, ranch-style houses, townhome condominium complexes, and single-family homes in cul-de-sacs, with the 2½ acre plots and their two-bedroom kit houses left over from the chicken farming days (The farms are no longer operating).

Live Oak has no downtown center, but 17th Avenue between Highway 1 and East Cliff Drive is the address for several schools, the Santa Cruz Live Oak Grange Hall, the Fire Department, a Santa Cruz County Sheriff's Department, the Family Swim Center, and the majority of Live Oak's business establishments.

While identified as part of Live Oak, Pleasure Point, Santa Cruz, California, has its own history and developed out of El Rancho Arroyo del Rodeo rather than Rancho Encinalitos.

Live Oak comprised 6,216 households, out of which 32.8% had children under the age of 18 living with them, 42.1% were married couples living together, 13.6% had a female householder with no husband present, and 39.1% were non-families. 26.9% of all households were made up of individuals and 10.9% had someone living alone who was 65 years of age or older. The average household size in Live Oak was 2.58 and the average family size was 3.11.

All content from Kiddle encyclopedia articles (including the article images and facts) can be freely used under Attribution-ShareAlike license, unless stated otherwise. Cite this article:
Live Oak, Santa Cruz County, California Facts for Kids. Kiddle Encyclopedia.