Kids Encyclopedia Facts
This page is about the river in California. For the river of the same name in the eastern Mexico, see San Lorenzo River (Mexico). 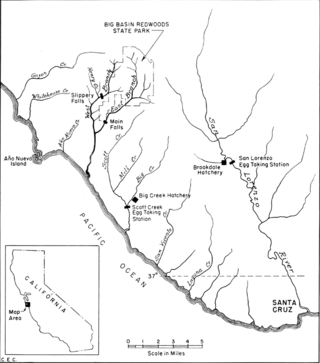 The San Lorenzo River is a 29.3 miles (47.2 km) long river whose headwaters originate in Castle Rock State Park in the Santa Cruz Mountains and flow south by southeast through the San Lorenzo Valley before passing through Santa Cruz and emptying into Monterey Bay and the Pacific Ocean.

The first European land exploration of Alta California, the Spanish Portolà expedition, gave the river its name when it passed through the area on its way north, camping near the west bank on October 17, 1769. Franciscan missionary Juan Crespi, traveling with the expedition, noted in his diary that, "Not far from the sea we came to a large river...It is one of the largest that we have met with on the journey...This river was named San Lorenzo." "Not far from the sea" indicates that the party probably crossed the river at one of what later became the commonly used fords. The fords, in turn, became the locations for the first two bridges across the river - at today's Water Street and Soquel Avenue.

In 1863, the California Powder Works was built adjacent to the river three miles upstream from Santa Cruz. The powder works made gunpowder for California mining after normal supplies had been interrupted by the American Civil War. Upstream from the works, a dam was constructed (in what is now Henry Cowell Redwoods State Park) to raise the water level enough to flow into a 1200-foot-long tunnel, dug through a granite ridge to convey water to a raised flume that, with a 60-foot drop, provided water power for the powder mill machinery. During dry summer weather when the river was low, the total river flow might be diverted into the flume from below the dam. The powder mill was closed in 1914 and the dam demolished.

The San Lorenzo River was once one of the most popular steelhead trout (Oncorhynchus mykiss) and coho salmon (Oncorhynchus kisutch) rivers on the Central Coast of California. Approximately 26 miles (42 km) of the San Lorenzo River, and at least nine of its major tributaries, support steelhead. Historically, the San Lorenzo River supported the largest coho salmon and steelhead fishery south of San Francisco Bay, and the fourth largest steelhead fishery in the State of California. In 1960, it was estimated that there were more than 30,000 fish living in this river, but a decade later the population had been reduced to 1,000. Fishing regulations were changed in 1998 in order to protect wild stocks vs. hatchery stocks. The changes in the regulations have been minimally effective and additional conservation/preservation efforts are still needed. Coho salmon and steelhead of the San Lorenzo River are listed as endangered and threatened, respectively, under the federal Endangered Species Act.

In 1995 a survey of coho salmon south of San Francisco Bay found coho restricted to only one remnant population in Waddell Creek, one small naturalized (hatchery-influenced) population in Scott Creek and a small hatchery-maintained, non-native run in the San Lorenzo River, all in Santa Cruz County. Historically, coho were found in approximately 50 coastal drainages in San Mateo and Santa Cruz counties, but by the 1960s spawning runs were limited to 11 stream systems. The 1995 combined average annual spawning population of native and naturalized coho salmon in Waddell and Scott Creeks was estimated at only 50-60 adults, and none in the San Lorenzo River, comprising only 1.5% of the estimated abundance of coho salmon south of San Francisco Bay in the early 1960s. Coho have returned as a result of stocking efforts at the Kingfisher Flat Hatchery on Scott Creek's Big Creek tributary. Coho salmon had not been recorded in the San Lorenzo River watershed since the early 1980s, until 2005, when at least a dozen adult coho were observed at the city of Santa Cruz Felton diversion fish ladder. In recent decades, continued growth has raised demand for water from the entire watershed system bringing attention to the need for further preservation of stream flows in order to protect young salmon, steelhead, and lamprey. In 2014, coho captured from the lower river were transferred to the Big Creek hatchery to enable local genetics to be used for stocking.

Following devastating floods in December 1955, the Army Corps of Engineers built flood control measures along the San Lorenzo River and Branciforte Creek through downtown Santa Cruz. No flooding from the San Lorenzo River was reported when a flow event of nearly equal magnitude occurred in January 1982, but the water levels were much higher than one would expect, based on the original design. That was because a large amount of sediment had re-deposited in the channel after it was built. The original project design (1956) required periodic dredging of the bed sediment, which is both expensive and destructive to aquatic and riparian habitat. The flood control channel was not maintained regularly, presumably for those reasons. The levees and floodwalls were rebuilt in 2004, but the design for those changes still assumed that the channel bed would be maintained by dredging. Although the latest project calls for less dredging the original project, any dredging at all is economically and environmentally unfeasible for the City of Santa Cruz, the local sponsor of the federal project. The current and likely future levels of flood protection provided by the project, without dredging, was being studied by the Army Corps of Engineers as of August 2011.

A habitat restoration project has been underway since 1985. Recent counts of fish show the population is slowly rising to approximately 3000. Tidal influence wanes between the Broadway and Soquel Avenue bridges in the city of Santa Cruz, where some sand bars are visible.

As early as the 1970s Santa Cruz County began to create a hydrology transport model of the San Lorenzo River, retaining a group of scientists and engineers from Earth Metrics Inc., who were to create the first mathematical model of the river, with the objective of analyzing bedload transport and downstream sedimentation. The model was also used to predict transport of nitrates and other water pollution, and would be eventually used to study a variety of different land management and flood control strategies.

Another problem for the river and its habitat is the water pollution from the city of Santa Cruz and the upstream communities of Felton, Ben Lomond, Brookdale, and Boulder Creek. The San Lorenzo River Watershed has the highest septic system density of any comparable area in the state of California. Bacteria levels were dangerously high in the 1980s with 3% to 6% of the septic systems failing, discharging untreated sewage to the ground surface and another 7% to 9% of households illegally discharging greywater, which also has a high bacteria and pathogen level. Despite improvements in septic systems over the last three decades, the bacteria levels in many areas barely meet the standards for safe swimming, and the nitrate levels are extremely high and are a threat to the drinking water supply for much of the county. 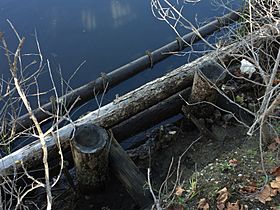 The eroded remains of the original San Lorenzo River Boardwalk.

Much of the upper reaches of this watershed are quite beautiful in their natural forest setting, while the lower reach is accessible to the large population of Santa Cruz. In 1987 the city of Santa Cruz retained ROMA, a San Francisco design firm, to develop a design concept plan for incorporating the natural elements of the river into the urban design fabric of the city. The plan led to creation of pedestrian walkways, picnic areas and view opportunities along the lower populated stretch of the river. The plan called for creation of a continuous forest to be established on the upper banks of Valley Oak, Buckeye, Willow and other trees with seasonal foliage.

One notably scenic reach between the Riverside Avenue and Broadway bridges may be the most visually prominent and attractive parts of the river. Here the river bends skirting the base of Beach Hill, a historic neighborhood and noteworthy topographic element of the city of Santa Cruz. This reach is visible from many parts of the city and gives a sense of steepness and enclosure within the channel. The west bank had been the site of a wooden boardwalk, now washed away by erosion.

All content from Kiddle encyclopedia articles (including the article images and facts) can be freely used under Attribution-ShareAlike license, unless stated otherwise. Cite this article:
San Lorenzo River Facts for Kids. Kiddle Encyclopedia.