Brookdale is a census-designated place (CDP) in Santa Cruz County, California. Brookdale sits at an elevation of 405 feet (123 m). It is located in the San Lorenzo Valley between Boulder Creek and Ben Lomond on Highway 9. The 2010 United States census reported Brookdale's population was 1,991.

The ZIP Code is 95007 and the community is inside area code 831. There is no mail delivery in Brookdale, though no home is more than 1.5 miles from the post office.

According to the United States Census Bureau, the CDP covers an area of 3.8 square miles (10.0 km²), all of it land.

This region experiences warm (but not hot) and dry summers, with no average monthly temperatures above 71.6 °F. According to the Köppen Climate Classification system, Brookdale has a warm-summer Mediterranean climate, abbreviated "Csb" on climate maps.

The Brookdale Inn & Spa, formerly known as the Brookdale Lodge, is known for the stream running through its primary restaurant, the Brook Room. The original lodge was built in 1890 at the site of the Grover Lumber Mill by James Harvey Logan a botanist and Judge (also responsible for the cultivation of the Logan berry). Before Judge Logan's development, the area was known as Clear Creek and Brookville. The inn was built around the river after 1922 while it was owned by Dr. Camp. The lodge was purchased by a new owner in 2007 and the name was changed to Brookdale Inn and Spa. The lodge underwent many structural changes followed by neglect and eventual abandonment. The property has once again been sold and is undergoing intensive renovations. 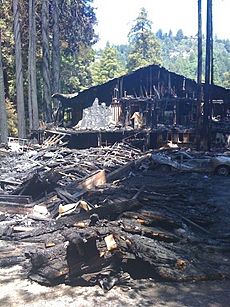 Damaged section of the lodge after the 2009 fire

On August 18, 2009, a fire engulfed a two-story section of the lodge near the rear of the main building that contains apartments mostly occupied by lodge employees. There were no reports of injuries to anybody staying at the inn, though some firefighters suffered minor injuries while fighting the blaze.

There have been two other large fires at the Lodge, the first fire occurred on October 24, 1956. In that fire the dining room and an adjoining 12-room house were destroyed. A group of stores adjacent to the dining room were also badly damaged. Damage from the 1956 fire was estimated at $200,000. The second fire occurred in 2005 in the same area of the main hotel as the 2009 fire.

The origin of the fire is still under investigation and the U.S. Bureau of Alcohol, Tobacco, Firearms and Explosives is helping to determine the cause of the three-alarm fire. According to the Boulder Creek Fire Chief the fire started under suspicious circumstances.

The census reported that 100% of the population lived in households.

All content from Kiddle encyclopedia articles (including the article images and facts) can be freely used under Attribution-ShareAlike license, unless stated otherwise. Cite this article:
Brookdale, California Facts for Kids. Kiddle Encyclopedia.