Marina is a city in Monterey County, California, United States. The United States Census Bureau estimated its 2013 population at 20,370. Marina is located along the central coast of California, 8 miles (13 km) west of Salinas, and 8 miles north of Monterey, at an elevation of 43 feet (13 m). Marina was incorporated in 1975 and is the newest city on the Monterey Peninsula. The city includes part of the California State University, Monterey Bay campus, the UCMBEST branch research center of UC Santa Cruz, and the Veterans Transition Center (VTC). In 2012, Marina was named one of the 100 Best Community for Young People by America's Promise Alliance. The Fort Ord Station Veterinary Hospital, built in 1941 to provide healthcare for U.S. Army horses and mules, was listed on the National Register of Historic Places in 2014. This is the first such official recognition on old Fort Ord.

William Locke-Paddon founded the town on 1,500 acres (6.1 km2) of land he bought for the purpose. The Marina post office opened in 1916. Marina incorporated in 1975. The City's history is intertwined with that of Fort Ord. Fort Ord lands were used as an infantry training center since the Mexican–American War. Major growth took place in 1938 with the first joint Army and Navy maneuvers held in 1940.

Fort Ord was selected in 1991 for decommissioning and the post formally closed after troop reassignment in 1994. In July 1994 the first academic year of California State University, Monterey Bay opened, and barracks were soon transformed into dorms.

As a result of base closure, some of the last undeveloped natural wildlands on the Monterey Peninsula are now overseen by the Bureau of Land Management, including 86 miles of trails for the public to explore on foot, bike or horseback. In 2012, President Barack Obama designated 14,000 acres of the closed base as a National Monument managed by the BLM. 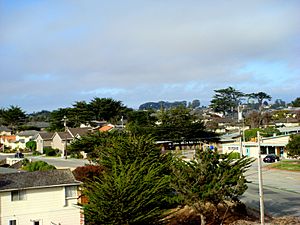 There were 6,745 households out of which 35.5% had children under the age of 18 living with them, 51.1% were married couples living together, 15.1% had a female householder with no husband present, and 28.7% were non-families. 21.4% of all households were made up of individuals and 6.4% had someone living alone who was 65 years of age or older. The average household size was 2.79 and the average family size was 3.25.

The military has been a significant part of life in Marina, which is located adjacent to the former Fort Ord, a US Army installation which closed in 1994 during the country's base closure initiative. Many former and retired military personnel reside in the city. The American Legion and the Veterans of Foreign Wars are active organizations. The Veterans Transition Center is instrumental in placing numerous US and state flags along Del Monte Blvd. and Reservation Road during the various holidays and special events, creating an "avenue of flags."

A traditional Labor Day Parade & Family Festival held the Saturday before the official holiday pays homage to the significant military history of the town.

Fort Ord Warhorse Day (in May) and Veterans Day Celebration (held on the Saturday before or after November 11) are Friends of the Fort Ord Warhorse living-history events cosponsored by City of Marina. These free public events are held at the historic Marina Equestrian Center Park.

The annual Otter Fest in August welcomes back students, staff, and faculty to CSU, Monterey Bay. It began in 2010 with a Key to the City presentation to the campus president. It is named after the university's otter mascot.

Earth Day is celebrated in April as a community work party to maintain and improve Locke-Paddon Park. Citizens for Sustainable Marina is the lead planning group for the event.

The Marina Air Faire, held in October, features vintage and experimental planes, and gives attendees the chance to ride in them (for a fee).

All events have free admission.

Marina also celebrates its 1975 incorporation every five years with numerous citywide events, including a Diversity Dinner celebrating the variety of cultures represented in the city. 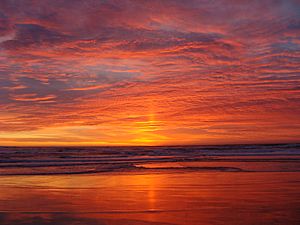 Marina State Beach is a windswept beach area between State Route 1 and Monterey Bay where water recreation, hang gliding and paragliding are popular. There is a boardwalk through the Marina Dunes Natural Preserves.

All content from Kiddle encyclopedia articles (including the article images and facts) can be freely used under Attribution-ShareAlike license, unless stated otherwise. Cite this article:
Marina, California Facts for Kids. Kiddle Encyclopedia.