Moss Landing (formerly, Moss) is a census designated place (CDP) in Monterey County, California, United States. Moss Landing is located 15 miles (24 km) north-northeast of Monterey, at an elevation of 10 feet (3 m). It is located on the shore of Monterey Bay, at the mouth of Elkhorn Slough, and at the head of the Monterey Canyon.

Moss Landing was originally called Moss. The Moss post office opened in 1895, and changed its name to Moss Landing in 1917. The name honors Charles Moss, who with a partner, built a wharf there. The port was a busy whaling port.

Prior to 1981, the community suffered from grave water contamination, severe septic tank failures, and public health problems. Sanitary sewers for the entire area were installed in 1982-84 due to federal grants secured by then Monterey County Supervisor Marc Del Piero.

The earliest culture that left evidence of the Moss Landing Elkhorn Slough area was that of the Ohlone Indians. Evidence from archaeological digs show that they may have lived here as long as 4,000 years ago. The Spanish took the landscape from the Ohlone Indians when they began settling missions in the 1700s and ran cattle over the hills of the surrounding area. The Americans arrived in the mid- 1800s and farmers turned the area into cropland. Loggers stripped the hillsides of trees. Whalers put out from the shore of Moss Landing to capture migrating whales, and a processing plant onshore reduced the giant mammals to oil and whale bone. Charles Moss, full of plans and schemes for his town at the mouth of the Elkhorn Slough, built a shipping facility and a pier. This pier where all the boats landed was owned by Moss, so the area became known as Moss Landing.

This region experiences warm (but not hot) and dry summers, with no average monthly temperatures above 71.6 °F. According to the Köppen Climate Classification system, Moss Landing has a warm-summer Mediterranean climate, abbreviated "Csb" on climate maps. 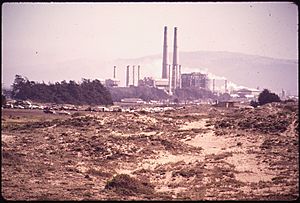 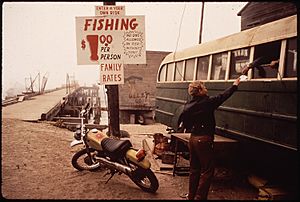 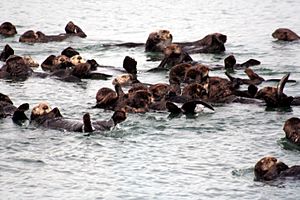 There were 125 households out of which 27.2% had children under the age of 18 living with them, 39.2% were married couples living together, 14.4% had a female householder with no husband present, and 45.6% were non-families. 31.2% of all households were made up of individuals and 8.8% had someone living alone who was 65 years of age or older. The average household size was 2.40 and the average family size was 3.09.

The Moss Landing Antique Street Fair is held annually on the last Sunday in July and hosts hundreds of antique vendors. It brings over ten times the population of Moss Landing to the area.

Other events include the May opener for rock cod fishing, blessing the fleet May 1, open house at Moss Landing Marine Labs held in April or May, and Nautical Flea Market held in May. 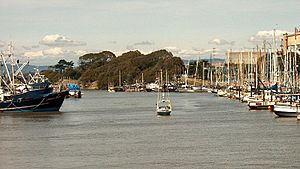 Pleasure and commercial boats at the Moss Landing harbor 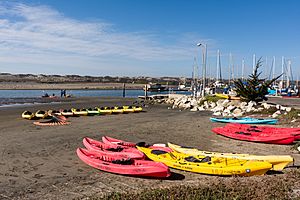 Moss landing is most noted as the gateway to Elkhorn Slough, one of the largest wetlands in the state. Elkhorn Slough is a precious resource and is always ranked in the top 10 best birding spots in the U.S according to the Audubon’s annual bird count. There is over 350 species of birds that migrate through the area annually. It is also known as one of the best spots in the world to see sea otters. The small fishing village of Moss Landing lies in the northern part of Monterey County and has numerous restaurants, galleries, a bed and breakfast, and is homeport to over 600 fishing and pleasure boats.

All content from Kiddle encyclopedia articles (including the article images and facts) can be freely used under Attribution-ShareAlike license, unless stated otherwise. Cite this article:
Moss Landing, California Facts for Kids. Kiddle Encyclopedia.