Castroville is a census-designated place (CDP) in Monterey County, California, United States. At the time of the 2010 census the population was 6,481.

The site of the community was originally part of Rancho Bolsa Nueva y Moro Cojo, a 30,901-acre (125.05 km2) Mexican land grant given in 1844 by Manuel Micheltorena, Governor of Alta California, to María Antonia Pico de Castro. After the 1848 cession of California to the United States following the Mexican-American War, Juan Bautista Castro, son of María Antonia Pico de Castro, founded Castroville in 1863.

Castroville is known for its artichoke crop and for the annual Castroville Artichoke Festival, leading to its nickname as the "Artichoke Center of the World".

Lake Merritt and the sloughs were popular for fishing and hunting. The area around Castroville was crisscrossed by a network of sloughs and swamps.

In the 1840s, mapmaker Duflot de Mofras, wrote, "A few leagues before reaching the "Pajaro River", an area measuring a few hundred meters where the round trembles under the horses feet, although the earth is hard and covered by turf, is encountered.

The land is probably formed by a solid crust superimposed on a vast miry base."

Lots were divided into 50 by 130 feet, an alley ran through each block. A lottery was established and 100 lots were given away to any person who would clear land and build homes.

In 1870 Manuel R. Merritt, the editor of the newspaper Castroville Argus (1869–1880) announced, “We will give alternate lots, on any part of the town site we still own… to any person who will build as practicable, a good comfortable dwelling house on his lot.

Juan Bautista Castro would run for county supervisor for the district. Castro, Merritt, Geil and others traveled to the oldest settlement of Sotoville in Salinas, that is where the Indians and Paisanos lived. They packed their belongings, it was said Castro packed the tortilla cast iron pans, personal items and moved the people to Juan Pomber's hotel for ninety days.

They were registered and became ready to vote. They were not able to read in English, so the ballets were translated for them.

Juan Bautista Castro won the office of supervisor of his district. Juan Pomber became Road- Master of the district. The county supplied money and low income housing was built on the donated lots. Castroville now had residents and a community.

The Southern Pacific Railroad began extending the line south from Gilroy. Juan Bautista Castro had ambitions of Castroville becoming the new Station Freight Depot. Castroville's asking price for the land was high. Salinas offered the land for free, and was selected over Castroville.

Castroville was still considered an important stop, serving as the "point of juncture of the road from Monterey, and from Soledad to San Francisco." The first roundhouse was built here in Castroville.

Established in July 17, 1869. The publishers were Juan Bautista Castro and Joseph R. Merritt.

Editors were Manuel R. Merritt (nephew of Juan Bautista Castro) and S.F. Geil. The office was in the Hicks Building (hardware store, later turned into school house, La Scuola) on the corner of Merritt and Poole Streets. It was a weekly paper and a new edition was available every Saturday.

Manuel R. Merritt (Editor of the Castroville Argus) was born June 8, 1855. He was the editor of the Castroville Argus, Castroville Gazette, and the Monterey County Herald. 1878 he was in the mercantile business, elected supervisor of Monterey County from the First District. Four times was a Delegate to the Democratic State Convention. He served as Secretary for the Democratic County Committee as well as serving as chairmen. He became Postmaster and Justice of the Peace. Real estate and insurance business. He died at the age of 48 from an accidental gunshot wound. 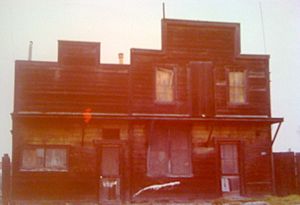 The last standing building in Chinatown. The Saloon

"In 1860 the Chinese contractors had established a presence here in Castroville. They were instrumental in clearing the slough, wetlands, and marshes especially in the northern section of the Rancho Bolsa Nueva y Moro Cojo. The land was ready to grow crops.

In 1878 Manteufel moved the Chinese businesses that were on Merritt Street to the corner of McDougall and Speegle Street. In 1883 a fire destroyed the entire Chinatown.

Chinatown was rebuilt and once again filled the sections of McDougall between Sanchez St. and Speegle St. 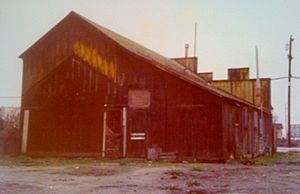 The sugar beets farms continued to multiply and grow towards Salinas. The Chinese population in Castroville continue to grow as well. In 1891 Sam Kee and Jim Lee purchased a lot in Castroville. The "Quong Chung Company" purchased another lot. "This was the first time any Chinese had purchased property in the Monterey Bay Area." 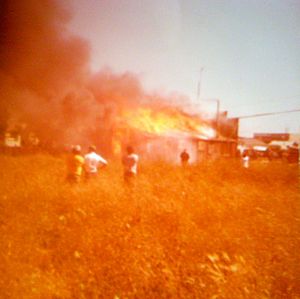 The California Alien Land Law of 1913 was passed. It prohibited aliens ineligible for citizenship from owning agricultural land or possessing long-term leases over it. It affected the Chinese, Indian, Japanese, and Korean immigrant farmers in California.

The new law was meant to discourage immigration. It created an inhospitable environment among contractors working here in the Monterey Bay Area. Letters from the editorial section had cartoons of anti-Chinese sentiment. A small group of business owners proposed an economic boycott of all businesses that employed Chinese directly or indirectly.

The Chinese contractors began to leave the Monterey Bay Area. Some moved to San Francisco's Chinatown."

It was the Spanish settlers who brought the artichoke to California. Some artichoke plants were in the gardens of European immigrants.

California's first artichoke fields grew south of San Francisco, near the town of Half Moon Bay, in the early 1920s.

In 1923, there were nine artichoke growers. Within four years, there were over 50 growers and 12,000 acres of artichokes growing in Castroville, and in the Monterey Bay area.

Mrs. Hebert was born in Carmel and grew up in Castroville. She moved to Salinas, graduated from Salinas High School, and Hartnell College.

She worked for Monterey County in the Planning Department, and was involved in the Junior League, Buena Vista Garden Club, American Cancer Society, and other civic-minded organizations.

Marilyn Monroe was given the honorary title of Artichoke Queen in 1947 during a visit to the Monterey Bay Area.

Stanley Seedman, owner of Carlyle's Jewelers in Salinas, California, made arrangements for a model named Doreen Nash to model for a big promotional sale in Salinas in February 1948. Doreen Nash was not able to attend; her replacement was Marilyn Monroe.

Marilyn Monroe spent a week in the Monterey Bay Area, visiting and promoting her career. She made her appearance replacing Doreen Nash at Carlyle's Jewelry and signed autographs. Marilyn Monroe was asked to draw the lucky ticket for a $250.00 diamond ring in the Vogue Theater.

During her stay in Salinas, Marilyn Monroe visited several Men's Civic Clubs including the Kiwanis Club. During the Kiwanis Club meeting, representatives from CalChoke (The California Artichoke Association) presented her with a sash.

A photograph was taken of her wearing a sash with the wording "California Artichoke Queen," and she posed with Edward Modena, Randy Barsotti, and Enrico Bellone. They were all holding artichokes."

The photographs of Marilyn wearing the sash and holding artichokes were used in advertisements and passed throughout the produce industry.

"Salinas River National Wildlife Refuge" is south of Castroville. It is the area where the Salinas River empties into the Monterey Bay. Established in 1974.

Based on Köppen climate classification, Castroville has a cool-summer Mediterranean climate (Csb) and several microclimates, resulting in mild winters and cool summers.

There is no official wet season or dry season. Precipitation is dispersed throughout the year with most of it coming from various types of fog. One variation of is San Francisco fog (also known as advection fog) which mainly occurs along the Central Coast, from San Francisco to Santa Barbara.

There were 1,434 households out of which 58.5% had children under the age of 18 living with them, 65.2% were married couples living together, 17.0% had a female householder with no husband present, and 10.7% were non-families. 7.9% of all households were made up of individuals and 4.0% had someone living alone who was 65 years of age or older. The average household size was 4.69 and the average family size was 4.78.

California Highways 1, 156, and 183 intersect in Castroville. Highway 156 connects to the 101. Highway 1 provides access from Monterey and Santa Cruz. Highway 183 connects Castroville to Salinas.

Merritt Street serves as Castroville main street. Most of Castroville's commerce is located in the Industrial Park on Blackie Road. Many public roads, low-income housing projects, and other publicly owned facilities have been funded by the Castroville Redevelopment Agency that was established by then-Monterey County Supervisor Marc Del Piero in the mid-1980s.

All content from Kiddle encyclopedia articles (including the article images and facts) can be freely used under Attribution-ShareAlike license, unless stated otherwise. Cite this article:
Castroville, California Facts for Kids. Kiddle Encyclopedia.