In the third round of the 2006 US Open, Becker defeated Andre Agassi in what was Agassi's last match as a professional player.

Benjamin Becker was born on 16 June 1981 in Merzig, West Germany, to Jörg, a tax office worker, and Ulrike. Becker has one younger sister. From 2001-2005, Becker played tennis at Baylor University, winning the NCAA singles championship as a junior in 2004 and leading the Bears to the team title that year. In 2005, the team finished runner-up at the NCAA tournament and won the ITA team indoor championship. He is the school's all-time leader in singles and doubles wins. A rarity in men's tennis, Becker attended college for four years before turning professional.

2006 was a breakthrough year for Becker. In June of that year, he qualified for Wimbledon and defeated Juan Ignacio Chela, before losing in the second round to Fernando Verdasco. At the 2006 U.S. Open, he defeated Filippo Volandri and No. 30 seed Sébastien Grosjean to reach the third round, where he defeated former world No. 1 Andre Agassi in four sets. The match was especially noteworthy as it was Agassi's last on the ATP circuit; he had announced that the 2006 U.S. Open would be his final tournament, and his defeat was followed by an 8-minute standing ovation from the Arthur Ashe Stadium crowd. The day after Becker's win over Agassi, his own U.S. Open bid was ended by Andy Roddick in the fourth round.

Becker has the distinction of having played the match that finished second latest in ATP history, defeating Jiří Novák in Tokyo in 2006 at 3.24 a.m. Following the 2006 U.S. Open, Becker confirmed his status as a promising newcomer on the ATP Tour, improving his ranking from No. 421 at the beginning of the year to No. 62 in November 2006. As a result, Becker received the Newcomer of the Year award during the 2006 ATP Awards and won the Sportsman of the Year award in his part of Germany. After completing his first season on the ATP Tour, Becker made the fastest rise of any player into the top 50.

2007 saw Becker improving his ranking further in the early season, including through his semi-final appearances at the Delray Beach International Tennis Championships, where he lost to world No. 8 James Blake; and in San Jose at the SAP Open where he lost to Ivo Karlović, the tallest player on the ATP Tour (6' 10"). As a result, Becker's ATP ranking peaked at No. 38 in March 2007. However, in 2007 Becker was unable to progress beyond the first round in any of the Grand Slams or ATP Masters Series events, with the exception of the Monte Carlo Masters, where he lost in the second round to Thomas Johansson.

Given his strong performance at the U.S. Open in the preceding year, Becker's first round loss in the 2007 edition caused his ranking to drop to 79. Despite good form in Bangkok, where he lost in the finals to Dmitry Tursunov, Becker finished the year ranked 84th. 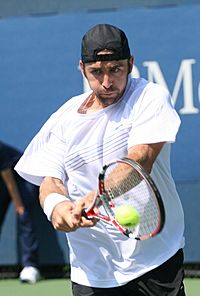 Becker reached the semifinal of the Gerry Weber Open in Halle, the Ordina Open in 's-Hertogenbosch and the Thailand Open in Bangkok. At the Grand Slam tournaments, Becker reached the second round of the 2010 Australian Open as well as in Wimbledon and at the 2010 US Open. He was knocked out in the first round at the 2010 French Open. He qualified for the ATP World Tour Masters 1000 tournament in Shanghai, but lost to Gaël Monfils in the first round. He advanced to the second round of the If Stockholm Open, where he lost to second seed Robin Söderling. He reached the quarterfinals at St.Petersburg, where he lost to Illya Marchenko. He qualified for the BNP Paribas Open in Paris-Bercy, where he lost to Gaël Monfils in the second round after a first-round win over Denis Istomin. He went 29–31 on the season and earned a career-high $543,431.

In 2012, Becker reached the second round in Doha, losing to Gaël Monfils, but he was eliminated in the first round of the Australian Open by Marcos Baghdatis. His best run of the year was in Memphis, where he reached the semifinals, defeating Dudi Sela, Xavier Malisse, and Łukasz Kubot, before succumbing to Milos Raonic. He defeated Olivier Rochus in the first round in Miami, but then lost to Julien Benneteau. He won a Challenger title in Nottingham, before reaching the second round at Wimbledon with a win over James Blake. He was eliminated by Radek Stepanek.

Becker reached the second round of the Australian Open, losing to Juan Martín del Potro. He then suffered a succession of first-round exits before again reaching the final in Nottingham, where he lost to Matthew Ebden. At the Aegon Championships, he reached the quarterfinals, defeating Bernard Tomic, Lukáš Rosol, and Alexandr Dolgopolov, before losing to eventual champion Andy Murray. At Wimbledon, he went down to Murray again in the first round.

Becker won a Challenger event in Istanbul in July. At Cincinnati, he qualified and reached the second round, only to lose to Rafael Nadal. At the US Open, he defeated Lukáš Rosol in the first round, but lost to Novak Djokovic in the second. He reached the quarterfinals in Metz with wins over two Frenchmen, Benoît Paire and Albano Olivetti, but lost to another, Nicolas Mahut. Becker won another Challenger tournament in Eckental, Germany, in October.

In 2014, Becker reached the second round at Chennai, losing to eventual champion Stanislas Wawrinka. He also reached the second round in Memphis, defeating Lukas Lacko, but succumbing to eventual champion Kei Nishikori. In Miami, he qualified and made the fourth round of the main draw, where he lost to Milos Raonic. In Houston, he made the second round, where he was eliminated by Jack Sock. He made the final of the 2014 Topshelf Open grass tournament that he had won in 2009, but he lost in the final to Roberto Bautista Agut.

2015 French Open counts as 2 wins, 0 losses. Kei Nishikori received a walkover in the third round, after Becker withdrew because of a muscle tear in his right shoulder, does not count as a Becker loss (nor a Nishikori win).

All content from Kiddle encyclopedia articles (including the article images and facts) can be freely used under Attribution-ShareAlike license, unless stated otherwise. Cite this article:
Benjamin Becker Facts for Kids. Kiddle Encyclopedia.