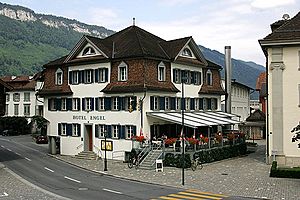 A hotel in Stans

Stans is the capital city of the canton of Nidwalden in Switzerland. It has a population of 7,300 people. The area of Stans is 11 km².

Stans was first noted in 1172. In 1798, it was attacked by French troops, followed the decision of Nidwalden not to adapt a new constitution. Children whose parents were killed by this event were gathered by the teacher Johann Heinrich Pestalozzi for his first school. The open-air assembly (Landsgemeinde) was held in Stans each year until 1997.

The main sights of Stans are:

All content from Kiddle encyclopedia articles (including the article images and facts) can be freely used under Attribution-ShareAlike license, unless stated otherwise. Cite this article:
Stans Facts for Kids. Kiddle Encyclopedia.