Janko Tipsarević (born 22 June 1984) is a Serbian professional tennis player. His career-high singles ranking is world No. 8, achieved on 2 April 2012. In his career, he has won four ATP World Tour titles, one ATP doubles title, three Futures, and 15 Challenger titles.

Tipsarević also won the 2001 Australian Open Junior title, he has achieved two victories over a World No. 1 player, having defeated compatriot Novak Djokovic twice. He also has thirteen victories against other players in the top 10.

His best results at a Grand Slam have been reaching the quarterfinals at the US Open in 2011 and 2012. As of 2018 he mostly plays on the Challenger Tour.

Tipsarević began playing tennis at age six, and at the age of nine, started playing at the New Belgrade Tennis Club with Russian coach Roman Savochkin. 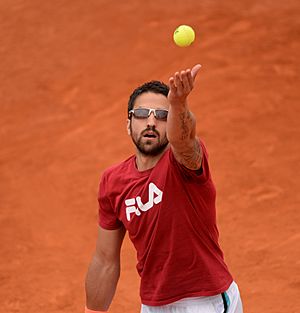 Tipsarević was born in Belgrade, Serbia (then SFR Yugoslavia). His father, Pavle, is a professor, and his mother, Vesna, is a housewife. He also has a younger brother, Veljko (Вељко). He finished high school and in 2006 completed his degree in Sports Management at the University of Belgrade.

He has been in a relationship with Biljana Šešević since 2007, and they married on 4 July 2010. Their first child (a girl) was born in January 2014. In his free time, he plays music as a DJ. He is also a fan of the football club FC Barcelona.

All content from Kiddle encyclopedia articles (including the article images and facts) can be freely used under Attribution-ShareAlike license, unless stated otherwise. Cite this article:
Janko Tipsarević Facts for Kids. Kiddle Encyclopedia.