Alongside his sporting career, he hosted the weekend afternoon radio show on Australian radio station Triple J, and the ABC live music show The Set, as well as being a commentator for the 2019 Australian Open. He also was a member of the panel on the AFL Footy Show in 2019. He is the only man to complete the Calendar-Year Grand Slam in quad doubles, winning all four major titles in 2019; in addition he has also won a non-calendar year Grand Slam in quad singles.

Dylan Alcott was born in Melbourne, Victoria, to parents Martin and Resie. He has an older brother named Zack. He was born with a tumour wrapped around his spinal cord which was operated on during the first few weeks of his life. The tumour was successfully cut out; however, it left Alcott a paraplegic, requiring him to use a wheelchair.

Alcott's first sport of choice was wheelchair tennis, where he represented Australia on numerous occasions, reaching a ranking of 100 in the world by age 16 (4th in the world for under-18s). 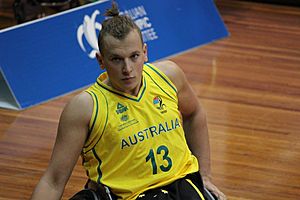 Alcott in a game versus Great Britain

Alcott played his first game of wheelchair basketball aged 14. Alcott made his debut for the Rollers at the 2006 World Championship, where they won a bronze medal. Alcott continued to hold his spot and was a member of the Rollers who travelled to the Beijing Olympic warm-up tournament in January 2008. Alcott made his name in basketball through his performances in the national league competition, competing for the Dandenong Rangers and being selected in the all star team for 2008. He has achieved success through junior competition as well; being named the Most Valuable Player at the Junior National Basketball Championships.

Alcott was part of the gold medal winning Australia men's national wheelchair basketball team at the 2008 Summer Paralympics, for which he received a Medal of the Order of Australia. In his first Paralympics Dylan was quoted; "To be 17 and win gold... well it just doesn't get any better than that".

In 2010, Alcott was a part of the Rollers success at the 2010 World Championships in Birmingham, England. It was the first world championship the Australian wheelchair basketball team had ever won, and Alcott was named in the World All Star 5 for the tournament.

At the 2012 Summer Paralympics, Alcott was part of the Australian men's wheelchair team that won silver. 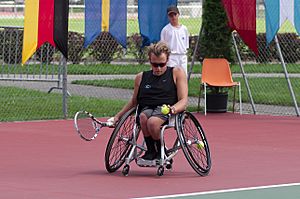 Alcott during the 2014 Swiss Open in Geneva

In 2014, Alcott returned to wheelchair tennis. At the age of 16, he was ranked inside the top five juniors in the world. In July 2014, he defeated world number three Andy Lapthorne 7–5, 6–1 in the British Open Wheelchair Tennis Championship final in Nottingham to win his first Super Series crown. Early in the year, he won the New Zealand Open in just his second tournament appearance. In January 2015, he won the quad wheelchair Australian Open title by defeating David Wagner in straight sets. It was his maiden grand slam title. At the conclusion on 2015, he was ranked number 1 after winning eight titles including two grand slam singles titles.

Alcott has a Commerce degree from the University of Melbourne. He currently works as a motivational speaker and as a radio host on Triple J. In his spare time, Alcott attends music festivals, and has become known for his "wheelchair crowdsurfing". In 2018, he launched Ability Fest, a universally accessible music festival, featuring pathways for wheelchairs, quiet areas for people with sensory disabilities, and Auslan (Australian Sign Language) interpreters. Alcott was a panel member on the AFL Footy Show until the show was cancelled in 2019.

In 2017, Alcott established the Dylan Alcott Foundation "with the core purpose of helping young Australians with disabilities gain self-esteem and respect through sport and study". In September 2017, Alcott was appointed Australian Patron for International Day of People with Disability.

All content from Kiddle encyclopedia articles (including the article images and facts) can be freely used under Attribution-ShareAlike license, unless stated otherwise. Cite this article:
Dylan Alcott Facts for Kids. Kiddle Encyclopedia.