Adrian Quist was born in Medindie, South Australia. His father was Karl Quist, who had been a noted interstate cricketer, and owned a sporting goods store at the time of his son's birth. Quist grew up in Adelaide and once played Harry Hopman, but lost, having given Hopman a head start. He was a three-time Australian Championships men's singles champion but is primarily remembered today as a great doubles player. He won 10 consecutive Australian doubles titles between 1936 and 1950, the last eight together with John Bromwich and he was also one of the winners of a "Career Doubles Slam". Quist was ranked World No. 3 in singles in 1939 and World No. 4 in 1936.

In his 1979 autobiography tennis great Jack Kramer writes that in doubles "Quist played the backhand court. He had a dink backhand that was better for doubles than singles, and a classic forehand drive with a natural sink. He was also fine at the net, volley and forehand."

After retiring from playing the game, Quist became a journalist, best known for his articles in The Sydney Morning Herald.

Quist was inducted into the International Tennis Hall of Fame in Newport, Rhode Island, in 1984.

Adrian Quist also held the most Davis Cup victories by any Australian until Lleyton Hewitt surpassed that record on 18 September 2010 in Cairns. 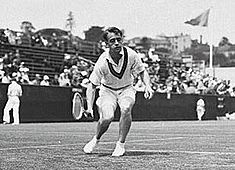 Adrian Quist hitting a low volley in the 1930s

All content from Kiddle encyclopedia articles (including the article images and facts) can be freely used under Attribution-ShareAlike license, unless stated otherwise. Cite this article:
Adrian Quist Facts for Kids. Kiddle Encyclopedia.