Radlett is a large affluent village in the county of Hertfordshire between St Albans and Borehamwood on Watling Street with a population of approximately 8,000. It is located in the council district of Hertsmere and is covered by two wards, Aldenham East and Aldenham West. It is located inside the M25 motorway.

Radlett lies in the valley of Tykes Water, a stream that runs north from Aldenham Reservoir to the River Colne. Now entirely surrounded by the Metropolitan Green Belt, it is seeing significant 'infill' development and pressure to relax the Green Belt restrictions.

Radlett is one of the most prosperous places in Britain. The town contains many substantial detached houses with large gardens. In the older centre there are also a few streets with Victorian semi detached and terraced houses. Over the past few years, the combination of its proximity to London and good transport links have meant that Radlett has become a property hotspot with majority of roads with an average price of over £1,000,000.

Watling Street, which is the main road through Radlett, has a wide variety of local shops and restaurants, as well as some national chain stores, a Post Office inside the local Budgens supermarket, and the Radlett Centre with a 300-seat auditorium for various performances. Attached to the Radlett Centre is the local Public Library.

There are three public houses in Radlett, the "Cat and Fiddle", "O'Sullivan's Bar" and the "Red Lion Hotel".

Radlett is situated on the ancient Watling Street, one of the oldest trackways in Britain. Various archaeological finds of Mesolithic and Neolithic flints provide evidence that the Radlett area was inhabited in the Stone Age; the land was densely wooded and remained so until the Middle Ages. The Catuvellauni tribe settled in parts of Hertfordshire, near St Albans and Wheathamstead in about 80BC, although no trace of settlement has been found in or near Radlett itself. The name Radlett appears to come from the Old-English rad-gelaete meaning a junction of the roads and it is likely that the settlement grew at the point where the ancient route from Aldenham to Shenley crosses Watling Street.

During the Roman occupation of Verulamium, the area from Radlett to Brockley Hill was home to a number of major potteries, which supplied not only the Roman capital but other parts of the province. One of these potteries is known to have existed on Loom Lane. Roman-era clay pits are still in evidence at the southern end of the village, in the area around Cobden hill.

The first documented history of the area comes from the Domesday survey of 1086. This confirms that most of the land was in the possession of the Abbey of Westminster, though parts of Titeberst (land to the east of Watling Street) were claimed by St Albans. The two major tenants were listed as Geoffrey de Mandeville and Geoffrey de Bec and they leased part of their holdings to tenant farmers. The land was densely forested but was gradually cleared throughout the medieval period for agricultural use and the population lived in dispersed farm settlements adjacent to field strips or scattered around the periphery of common land which made up a substantial part of the southern and western area of the Parish.

Radlett seems to have consisted of two farms: Darnells (first mentioned in 1358) and Gills Hill on the west side of Watling Street; and the estates of Aldenham Lodge, Newberries and Organ Hall on the east, plus Newlands (first recorded in 1291) and a few cottages. There are records of at least two other medieval moated homesteads within the Parish – Penne’s Place and Kendals, but tantalisingly little physical evidence. These names continue to be of significance throughout the development of Radlett. The first recorded reference of Radelet comes from 1453 and it was usually spelt with one T until the mid-nineteenth century. With the dissolution of the monasteries in 1536, the disputes over land ownership in the Parish between St Albans Abbey and Westminster Abbey ceased to be viable and the land was sold to create revenue for the crown.

In 1823 Radlett was the site of an infamous murder. 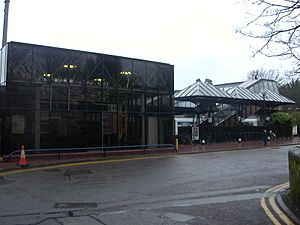 The modern ticket office at Radlett station, dating from the 1970s, contrasts with the ornate shelter above the cycle storage area.

In 1860 the Midland Railway was extended from Bedford into London and a station was built at Radlett connecting it with London. On 8 December 1865 the Ecclesiastical Parish of Radlett was created out of the eastern part of Aldenham and this marks the start of the modern history of the village. Development could only start when the landowners sold off their land for this purpose and this started in the final decade of the 19th century when land to the west of Watling Street was sold off. In 1910 the estate of Aldenham Lodge to the north of Shenley Hill was released for development and in 1935 the Newberries estate. Newberries mansion was demolished in the 1950s and Aldenham Lodge in 1964.

The 1948 Olympic Marathon went through Radlett. It was an out-and-back course from the Empire Stadium, Wembley.

The introduction of the Metropolitan Green Belt in the 1950s set a legal framework limiting further outward growth beyond the then existing limits of the village, and since then new development has been restricted to infilling within the built-up area. Despite this, many new houses continue to be built in former large gardens, and the population now stands at over 8000.

In 2005, and 2006, there was a large campaign in the village, and surrounding areas to save the Fire Station, which was opened 100 years ago. a campaign to prevent the building of a huge distribution centre at what was previously the Radlett Aerodrome Site, the former production site of the British aircraft builder Handley Page.

Radlett lies close to the M25 and M1 motorways and the A1 trunk road. There is a commuter rail service that connects Radlett railway station to south and central London including St. Pancras International. From Radlett there are also train services to London Gatwick and London Luton airports, whilst London Heathrow is a forty-minute drive away. There are two main buses that run through Radlett, both operated by UNO. The bus route 602 runs roughly East-West connecting Watford, Radlett, St Albans and Hatfield and the route 655 running roughly North-South connecting Hatfield, St Albans, Radlett and Borehamwood.

As a town, Radlett has an official Jewish population of 28.3 per cent, the highest proportion in England and Wales by some margin, the next highest percentage being 19.4% in neighbouring area of Shenley and the nearby areas of Bushey, Barnet, Borehamwood and Elstree being the only other areas with a percentage greater than 15%. As the method used by the British census for identifying race and religion has shown itself to be problematic, it is likely that the actual number of persons of Jewish background in Radlett is somewhat higher, approaching 35%. Radlett has been called "the new Edgware."

There are four churches in Radlett: Christ Church, an Anglican church on Watling Street founded in 1864; St. Anthony of Padua Catholic Church in the Crosspath; St. John's Anglican church, a sister church of Christ Church, in Gills Hill Lane; and The United Free Church in Station Road. The United Free Church was formed by uniting the Methodist and United Reformed Churches in Radlett.

Radlett has a number of very active local groups and societies. These include:

Radlett is twinned with Louveciennes, France and Lautertal, Germany.

All content from Kiddle encyclopedia articles (including the article images and facts) can be freely used under Attribution-ShareAlike license, unless stated otherwise. Cite this article:
Radlett Facts for Kids. Kiddle Encyclopedia.