Martin Rowson ROH-sən (born 15 February 1959) is a British editorial cartoonist and writer. His genre is political satire and his style is scathing and graphic. He characterises his work as "visual journalism". His cartoons appear frequently in The Guardian and the Daily Mirror. He also contributes freelance cartoons to other publications, such as Tribune, Index on Censorship and the Morning Star. He is chair of the British Cartoonists' Association.

Rowson was adopted as a child, and educated at the independent Merchant Taylors' School in Northwood in north-west London, followed by Pembroke College, Cambridge, where he read English Literature. 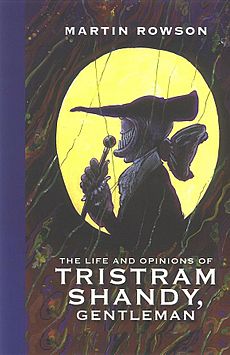 Rowson's books include graphic adaptations of The Waste Land and Tristram Shandy. Snatches, his novel, was published in 2006 (ISBN: 0-224-07604-3). It is a comic journey through history, focusing on the "stories of the worst decisions the human race has ever made". Stuff (2007), his next novel, is part autobiography, part history of his family and upbringing. He also drew original cartoons for the title sequence of the film Pride and Prejudice and Zombies. 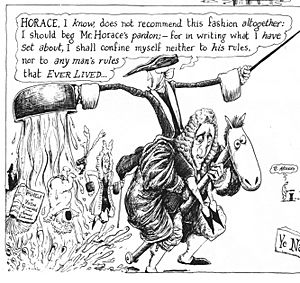 Horace I know... – Detail from page 7 of Rowson's Tristram Shandy

In 2008 he published The Dog Allusion: Gods, Pets and How to Be Human, arguing that religion is a complete waste of time and money — much like keeping pets. (The title is itself an allusion to the Richard Dawkins book The God Delusion.) In 2014 'The Coalition Book' containing a collection of cartoons, and a written account, of the four years of the coalition government was published by Self Made Hero. He is an Honorary Associate of the National Secular Society and a distinguished supporter and board member of Humanists UK.

On 15 September 2010, Rowson, along with 54 other public figures, signed an open letter published in The Guardian, stating his opposition to Pope Benedict XVI's state visit to the UK.

In June 2013, Rowson became the fifth trustee for People's Trust for Endangered Species (PTES), a wildlife conservation charity based in Battersea, south-west London.

Rowson is married and has two children. Who's Who lists his interests as "cooking, drinking, ranting, atheism, zoos, collecting taxidermy".

In December 2019, along with 42 other leading cultural figures, Rowson signed a letter endorsing the Labour Party under Jeremy Corbyn's leadership in the 2019 general election. The letter stated that "Labour's election manifesto under Jeremy Corbyn's leadership offers a transformative plan that prioritises the needs of people and the planet over private profit and the vested interests of a few."

All content from Kiddle encyclopedia articles (including the article images and facts) can be freely used under Attribution-ShareAlike license, unless stated otherwise. Cite this article:
Martin Rowson Facts for Kids. Kiddle Encyclopedia.