Tsing Hua University or THU (simplified Chinese: 清华大学; traditional Chinese: 清華大學; pinyin: Qīng Huá Dà Xué), is a university in Beijing, People's Republic of China. It is regarded as one of the best and most selective universities in China. It was established in 1911 as a school for Chinese graduates wanting to go further with their studies at universities in other countries, especially the United States and the UK.

Tsing Hua University was opened in Beijing, China in 1911 on the site of a former royal garden belonging to a prince. It was first a preparatory school, a school for preparation, for students to be later sent by the government to study in America. The people who graduated were transferred directly to American schools as juniors upon graduation.

In 1925, the school established its College Department and started its research institute on Chinese Study. In 1928, the name officially changed to National Tsing Hua University (NTHU).

During the Second World War in 1937, Tsing Hua University, along with Peking University and Nankai University, merged to form Chang Sha Temporary University in Chang Sha, which later became National Southwestern Associated University in Kunming of Yunnan province. After the war, Tsing Hua moved back to Beijing and resumed its operation.

The communist victory at the end of the Chinese Civil War in 1949 led to the creation of the People's Republic of China (PRC), so the university's President Mei Yi Qi and some professors went to Taiwan where they established the National Tsing Hua Institute of Nuclear Technology in 1955, which later became National Tsing Hua University.

In 1952, the communist government regrouped the country's higher education institutions in an attempt to build a Soviet style system, with individual institutions tending to specialise in a certain field of study. TsingHua University was disassembled, losing its law school, school of agriculture, school of sciences and humanities, and became a polytechnic engineering university. Even so, the University remained in the top tier schools in China (Many Chinese scholars regards that its only rival is Peking University). In many years following this regroup, the school was often referred to as the "MIT of China"[1][2][3]. But since the 1980s, the university began to incorporate a multidisciplinary system. As a result, a lot of schools were built and rebuilt. These included the School of Science, School of Economics and Management, School of Humanities and Social Sciences, School of Law, School of Public Administration, and the School of Art. Only two colleges charge tuition to its graduate students; the law school and the Academy of Arts and Design.

Since 1977, the university has enjoyed rich government funding and policy support which greatly improved its facilities. Since 1978, it has flourished with the re-establishment of the departments in sciences, economics and management, and the humanities. Its graduate school has been recognized nationally, ranking first in the National Evaluation of Graduate Schools. The School of Continuing Education uses modern information technologies, as well as the advanced educational resources at Tsing Hua.

Most Chinese university rankings place TsingHua first in China. It attracts the most talented students of the nation and enjoys the best engineering and applied sciences programs in China, occupying a position similar to MIT, Stanford, and Princeton in the US. Peking Union Medical College of Tsinghua University [4] is likewise regarded as the best medical school in the country. Tsinghua's longtime rival Peking University is better known for natural sciences, social sciences, law, and liberal arts, somewhat similar to the Ivy League schools of Yale, Harvard, and the University of Pennsylvania.

Admission to Tsinghua is highly competitive. The majority of selected students are national scholars and among the brightest high school graduates in the country. Many of China's top scientists, engineers, politicians and business leaders are among Tsinghua alumni. The current Chinese president, Hu Jintao, is a former Tsinghua student who graduated with a degree in hydraulic engineering in 1964.

As of 2003, Tsinghua University had 12 colleges and 48 departments, 41 research institutes, 35 research centers, and 167 laboratories, including 15 national key laboratories. In September 2006, Peking Union Medical College was renamed to Peking Union Medical College, Tsinghua University [5]. The university offers 51 bachelor's degree programs, 139 master's degree programs and 107 Ph.D. programs. Recently, Tsinghua has become the first Chinese university to offer a Master of Laws program in American law, through a cooperative venture with the Temple University Beasley School of Law. The university is a member of LAOTSE, an international network of leading universities in Europe and Asia. Each year, the University celebrates the Intellectual Property Summer Institute in cooperation with Franklin Pierce Law Center of Concord, New Hampshire.

On April 12, 2007, Tsinghua University's School of Economics and Management became the first business school in the Chinese mainland to earn AACSB accreditation. Former Premier Zhu Rongji was the founding dean of the school.

The University's Institute of Nuclear and New Energy Technology is on a separate campus in a northern suburb of Beijing.

Tsinghua is where former United States Vice President Al Gore lectured at in his documentary, An Inconvenient Truth. Viewers can see the university lecture hall, with its well-known purple seats.

The campus of Tsinghua University is in northwest Beijing, in the Haidian district which was designated for universities.

It is located on the former site of Qing Dynasty royal gardens and retains some Chinese-style landscaping as well as some traditional buildings, but many of its buildings are Western-style reflecting the American influence in its history. It is known throughout China for having one of the most beautiful campuses. 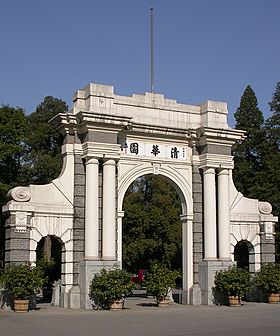 The Old Gate is a symbol of Tsinghua University

In 1923, another version of the school alma mater with lyrics in Chinese (by Prof. Wang Luan Xiang, a Chinese language professor of Tsinghua) was composed by Mrs. Zhang Hui Zhen and was well received by the students and faculty. The song was then adopted as the school's official Alma Mater.

The last Sunday of April is Tsinghua's anniversary and Homecoming (Xiao-Qing) Day.

Cheer for old Tsinghua
Tsinghua must win.
Fight to the finish,
never give in.
You do your best, boys,
we'll do the rest, boys.
Fight for the victory, Rha, Rha, Rha! 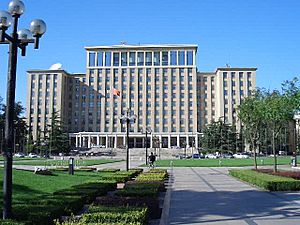 Tsinghua University has signed agreements with ACCA (Association of Chartered Certified Accountants), the renowned international accountancy body that offers Chartered Certified Accountant qualification worldwide, to train the new generation of professional accountants in China. Under the agreement, Tsinghua will develop the programme that under ACCA's syllabus for enabling China's young accounting students to join the ACCA professional exam scheme at a higher level. Tsinghua will also recognise the Oxford Brookes University BSc Applied Accounting degree, which has been successfully developed in conjunction with ACCA and which enables students who have completed two parts of the ACCA qualification to apply for the Oxford Brookes degree.(Please click: [6])

All content from Kiddle encyclopedia articles (including the article images and facts) can be freely used under Attribution-ShareAlike license, unless stated otherwise. Cite this article:
Tsing Hua University Facts for Kids. Kiddle Encyclopedia.