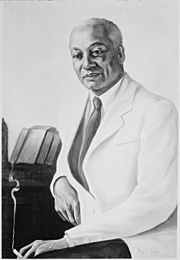 Alain Leroy Locke (September 13, 1886 – June 9, 1954) was an American writer, philosopher, educator, and patron of the arts. He was the first African American Rhodes Scholar in 1907. Locke was called the "godfather" of the Harlem Renaissance. As a result, popular listings of influential African-Americans have repeatedly included him. On March 19, 1968, the Rev. Dr. Martin Luther King, Jr. said: "We're going to let our children know that the only philosophers that lived were not Plato and Aristotle, but W. E. B. Du Bois and Alain Locke came through the universe."

He began teaching at Howard University where he remained until 1953. He retired because of heart problems. Locke died on June 9, 1954 in New York City. His last work was an unfinished book, The Negro in American Culture. It was finished and published in 1956 by his daughter, Margaret Just Butcher.

All content from Kiddle encyclopedia articles (including the article images and facts) can be freely used under Attribution-ShareAlike license, unless stated otherwise. Cite this article:
Alain LeRoy Locke Facts for Kids. Kiddle Encyclopedia.