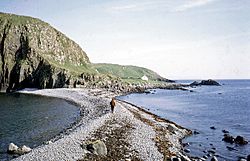 Storm beach connecting Garbh Eilean and Eilean an Tigh in the Scottish Western Isles. The narrow neck of pebbles is covered at spring tides and during storms. 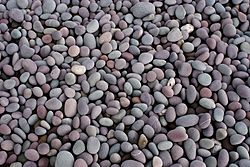 Pebbles on a shingle beach in Somerset, England 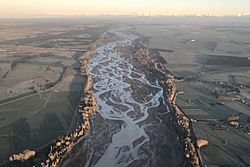 View of the Waimakariri River looking towards the Southern Alps

A shingle beach (or pebble beach) is a beach made of pebbles, not sand. The stones may be from 2 to 200 millimetres (0.1 to 7.9 in) diameter. These beaches strongly resist erosion by waves.

This beach landform is quite common in Western Europe, because the pebbles come from the lines of flint in the chalk. Chesil Bank is an example. When the chalk erodes, the tough flint stays as pebbles.

Other examples are found in Bahrain, North America and in a number of other places. On the east coast of New Zealand's South Island, there are mixed shingle and sand fans in the braided rivers.

All content from Kiddle encyclopedia articles (including the article images and facts) can be freely used under Attribution-ShareAlike license, unless stated otherwise. Cite this article:
Shingle beach Facts for Kids. Kiddle Encyclopedia.