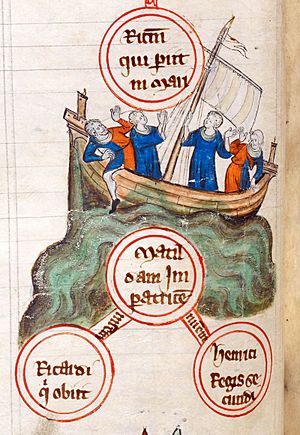 The White Ship (French: la Blanche-Nef) was a historic ship that sank in the English Channel. It went down near the Normandy coast off Barfleur, on 25 November 1120. Only two of those aboard survived. Those who drowned included William Adelin, the only surviving legitimate son and heir of King Henry I of England. William Adelin's death led to a succession crisis and a chain of events that changed the history of England.

The White Ship was a new ship captained by Thomas FitzStephen. His father Stephen FitzAirard had been captain of the ship Mora for William the Conqueror when he invaded England in 1066. FitzStephen offered his ship to Henry I of England to use it to return to England from Barfleur in Normandy. Henry had already made other plans, but allowed many members of his royal court to take the White Ship. This included his only son, William Adelin. It also included his illegitimate son Richard of Lincoln, his illegitimate daughter Matilda FitzRoy, Countess of Perche and many other nobles. According to the chronicler Orderic Vitalis, the crew asked William Adelin for wine and he supplied it to them in great abundance. By the time the ship was ready to leave there were about 300 people on board although some had left before the ship sailed due to the excessive drinking going on.

The ship's captain, Thomas FitzStephen, was ordered by the revelers to catch up to and pass the king's ship which had already sailed. The White Ship was fast, of the best construction and had recently been fitted with new materials. This made the captain and crew certain they could reach England first. But when the ship left in the dark, its port side struck a submerged rock called Quillebœuf and the ship quickly sank. William Adelin got into a small boat and could have survived but he turned back to try to save his half-sister, Matilda (Countess of Perche), when he heard her cries for help. His boat filled with water when others tried to get in to save themselves, and William drowned along with them. According to Orderic Vitalis only two survived by clinging to the rock all night. One was a butcher from Rouen, the second was Geoffrey de l'Aigle. The chronicler further claimed that when Thomas FitzStephen came to the surface after the sinking and learned that William Adelin had not survived, he let himself drown rather than face the King.

One legend says that the ship was doomed because priests were not allowed to board it in the customary manner.'

A direct result of William Adelin's death was the period known as the Anarchy. The White Ship disaster had left Henry I with only one legitimate child, a second daughter named Matilda. Although Henry I had forced his barons to swear an oath to support Matilda as his heir on several occasions, a woman had never ruled in England in her own right. Matilda was also unpopular because she was married to Geoffrey V, Count of Anjou. He was a traditional enemy of England's Norman nobles. Upon Henry's death in 1135, the English barons were not sure they wanted Matilda as queen Regnant.

One of Henry I's male relatives, Stephen of Blois, the king's nephew by his sister Adela, usurped Matilda as well as his older brothers William and Theobald to become king. Stephen had allegedly planned to travel on the White Ship but had left just before it sailed; Orderic Vitalis attributes this to a sudden bout of diarrhoea.

After Henry I's death, Matilda and her husband Geoffrey of Anjou, the founder of the Plantagenet dynasty, started a long and devastating war against Stephen and his allies for control of the English throne. The period called the Anarchy lasted from 1135 to 1153 with devastating effect, especially in southern England.

A historian who lived about that time William of Malmesbury wrote:

"Here also perished with William, Richard, another of the King's sons, whom a woman without rank had borne him, before his accession, a brave youth, and dear to his father from his obedience; Richard d'Avranches, second Earl of Chester, and his brother Otheur; Geoffrey Ridel; Walter of Everci; Geoffrey, archdeacon of Hereford; the Countess of Chester; the king's niece Lucia-Mahaut of Blois; and many others ... No ship ever brought so much misery to England."

All content from Kiddle encyclopedia articles (including the article images and facts) can be freely used under Attribution-ShareAlike license, unless stated otherwise. Cite this article:
White Ship Facts for Kids. Kiddle Encyclopedia.