Pevensey is a village and civil parish in the Wealden district of East Sussex, England. The main village is located 5 miles (8 km) north-east of Eastbourne, one mile (1.6 km) inland from Pevensey Bay. The settlement of Pevensey Bay forms part of the parish. It was here that William the Conqueror first landed on and invaded England in 1066 after crossing the English Channel from Normandy, France.

The name Pevensey was first recorded in 947 as Pefenesea, meaning "River of [a man named] Pefen". It comes from the Anglo-Saxon personal name Pefen plus eã, meaning "river". This is probably a reference to the now largely silted-up marshes. 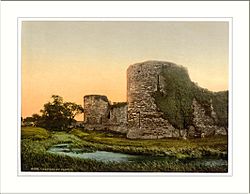 In the 4th century the Romans built a fort at Pevensey, which they named Anderitum. Pevensey village was just outside the fort. Around 491, after the Romans left, Saxons began moving to the south coast. They besieged Anderitum over a number of years. After a long struggle the British defences were overrun. The old Roman fort of Anderida was burned and left in ruins. In 1042, Harold Godwinson, later Harold II of England, established a stronghold here.

When William the Conqueror invaded Sussex in September 1066, there were no defenders at Pevensey. The bay provided a safe haven for the invading Norman fleet. The English army had been awaiting Duke William's arrival on the south coast all summer. With supplies running short King Harold allowed his soldiers to return home. When Harald Hardrada the king of Norway invaded northern England in late September, King Harold gathered his army and moved north to York, 250 miles away, to meet the invaders. William, meanwhile, moved his army and fleet to Hastings and built a fort while he awaited Harold and his army. Hastings was a cinque port and with the fort could allow the Norman army to leave England quicker if they were defeated.

After the Battle of Hastings the Roman fort at Pevensey was occupied by the Normans. It was granted to Robert, Count of Mortain (half brother to William). Robert de Mortain built his castle there. The castle was besieged several times during the 11th–13th centuries. Queen Elizabeth I ordered that it be demolished but the order was ignored. As late as 1942 small additions were made to the castle for the defence of Britain. It became a lookout over the channel for German aircraft during World War II. Today the castle is in the upkeep of English Heritage.

All content from Kiddle encyclopedia articles (including the article images and facts) can be freely used under Attribution-ShareAlike license, unless stated otherwise. Cite this article:
Pevensey Facts for Kids. Kiddle Encyclopedia.