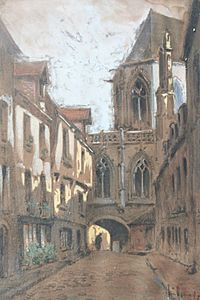 Falaise is a commune in the Calvados department in the Basse-Normandie region in northwestern France.

Falaise is located on the river Ante near Caen in France. The Ante river flows into the larger Dives river. Falaise is in the Normandy region of France. 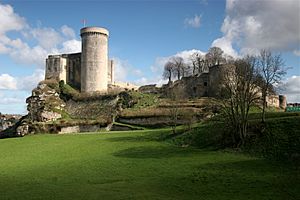 Castle of William the Conqueror 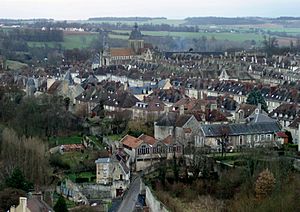 Faliase is where William the Conqueror was born. William became Duke of Normandy when he was just a boy. He went on to become the first Norman king of England in 1066. Falaise was where many of the dukes of Normandy resided before William. It is where the Treaty of Falaise was signed in December 1174. It was a treaty between William I of Scotland, King of Scots, and the King of England Henry II Plantagenet.

The town is also the place where Rabbi Yom Tov of Falaise, grandchild of Rashi held his court.

In modern times it is known for the battle of the "Falaise Pocket" during Operation Overlord in August 1944. Two German armies were surrounded by the Allied armies. About 10,000 German soldiers were killed. Over 50,000 were taken prisoner.

Much of Falaise was destroyed by Allied bombs. It was then captured by Canadian and Polish solders. Falaise was restored after the war.

All content from Kiddle encyclopedia articles (including the article images and facts) can be freely used under Attribution-ShareAlike license, unless stated otherwise. Cite this article:
Falaise Facts for Kids. Kiddle Encyclopedia.