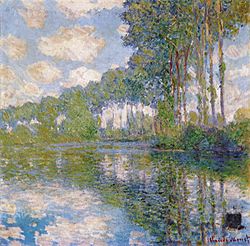 A landscape by Claude Monet, Poplars on the Banks of the Epte.

The Epte is a river in Seine-Maritime and Eure, in Normandy, France. It is a tributary of the river Seine. It begins in Seine-Maritime department in the Pays de Bray, near Forges-les-Eaux. The river empties into the Seine not far from Giverny.

In 911 the Treaty of Saint-Clair-sur-Epte established the river as the historical boundary between Normandy and Île-de-France. This divided the traditional county of the Vexin into two parts. The Norman Vexin became a part of Normandy while the French Vexin remained a part of the Île-de-France. A series of castles were built on both banks of the Epte to guard this frontier.

Claude Monet lived at Giverny near the river for more than forty years. In his garden, by diverting a branch of the Epte, he established a water garden with its famous water-lily pond and a Japanese-style bridge. The river appears in several of his works, including Peupliers au bord de l'Epte (Poplars on the Banks of the Epte).

All content from Kiddle encyclopedia articles (including the article images and facts) can be freely used under Attribution-ShareAlike license, unless stated otherwise. Cite this article:
Epte Facts for Kids. Kiddle Encyclopedia.