Slains Castle, also known as New Slains Castle to distinguish it from nearby Old Slains Castle, is a ruined castle in Aberdeenshire, Scotland. It overlooks the North Sea from its cliff-top site 1 kilometre (0.62 mi) east of Cruden Bay. The core of the castle is a 16th-century tower house, built by the 9th Earl of Erroll. Significant reconstruction of the castle has been carried out a number of times, lastly in 1837 when it was rebuilt as a Scots Baronial mansion. At one time it had three extensive gardens but is now a roofless ruin. Plans to restore the castle have been on hold since 2009. It is a Historic Environment Scotland Category B listed building. The castle is linked with the novels of Bram Stoker, including Dracula.

The Clan Hay were a powerful family in the area for generations, having possessed the lands of Slains since the 14th century. In 1453 Sir William Hay, the clan chief, was made Earl of Erroll by King James II. At this time the local seat of power was Old Slains Castle, near Collieston some 8 kilometres (5.0 mi) to the south-west. Francis Hay, 9th Earl of Erroll, succeeded in 1585, and converted to Roman Catholicism. He conspired with other Catholic nobles, including the Earl of Huntly, with whom he joined in a brief rebellion in 1589. Erroll was also a signatory of the "Spanish Blanks", documents signed by members of the Catholic nobility of Scotland, and otherwise left to be filled in with the terms of Spanish aid. Erroll was declared a traitor in 1594, and Old Slains Castle was destroyed in October on the orders of King James VI.

After a period abroad Erroll returned to Scotland, and abjured Roman Catholicism in 1597, subsequently returning to royal favour. He abandoned Old Slains and built a courtyard and square tower on the present site. Originally named Bowness, it later became known as New Slains. The wings around the courtyard were extended in 1664 by addition of a gallery or corridor, and in 1707 the entrance front was renewed.

In 1820 William Hay, 18th Earl of Erroll, married Lady Elizabeth FitzClarence, the illegitimate daughter of King William IV and Dorothea Jordan. In the 1830s the 18th Earl commissioned the Aberdeen architect John Smith to remodel the castle. This resulted in a virtual rebuilding of Slains in a Scots Baronial style, including granite facings, in 1836–1837. Gardens were laid out in the late 1890s by the landscape architect T. H. Mawson. 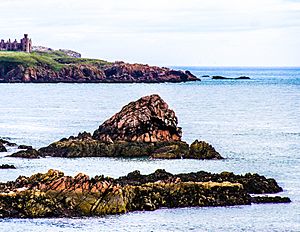 Slains Castle has been linked with Bram Stoker's novel Dracula. 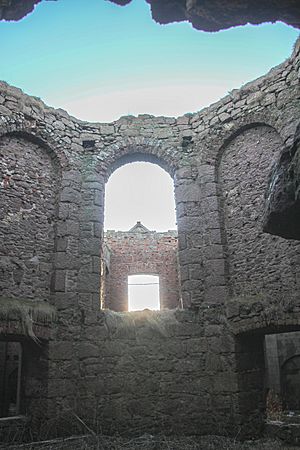 Slains Castle is associated with the author Bram Stoker, who was a regular visitor to nearby Cruden Bay between 1893 and 1910. The castle is mentioned in his locally-set novels, The Watter's Mou' and The Mystery of the Sea. It also provided the inspiration for Kyllion Castle in The Jewel of Seven Stars. Slains Castle is commonly linked with Dracula. It is likely that the castle provided a visual palette for Bram Stoker when he started writing the book in Cruden Bay. A distinctive room in Slains Castle, the octagonal hall, may be the source for the octagonal room in Dracula.

In 1913 the 20th Earl of Erroll sold New Slains, ending more than 300 years of occupation by the family. It was purchased by Sir John Ellerman, the wealthy but secretive owner of the Ellerman Lines shipping company, who leased it out. In 1925 the roof was removed to avoid taxes, and the building has deteriorated since. It is now a roofless shell, with most of the outer and inner walls standing to full height. In 2004 it was reported that the Slains Partnership was preparing plans for restoration of the building and conversion into 35 holiday apartments. In August 2007 the scheme was granted outline planning permission by Aberdeenshire Council, but the plans were put on hold in 2009 due to the economic downturn.

New Slains castle is a Historic Environment Scotland Category B listed building. At first inspection the ruin appears to be a blend of several different architectural styles and periods, due to diverse masonry including older mortared granite, mortared medieval red brick, mortared sandstone and newer well faced granite. In fact most of the architecture seems to derive from a rather cohesive interval 1597 to 1664, which construction is the most expansive and includes the mortared rough granite and medieval brick. The 1836 work adds smoother granite facing that contrasts with the older construction style.

The defensive works of the castle include use of the North Sea cliffs; an abyss to the west that functions as a deep impassable moat; and a ruined rampart that would have been the main entrance on the south. The ruins include reasonably well preserved elements of three- and four-storey structural elements and a basement course over some of the range, especially at the eastern side. There are well-preserved basement kitchen works with numerous firepits and masonry indented storage spaces. The internal doorways are primarily of well-preserved wooden lintel construction, with numerous examples of mortared sandstone and medieval brickwork archways. The interior of the ground level is a maze of passageways and smaller rooms, reflecting a high state of occupancy in 17th-century times.

All content from Kiddle encyclopedia articles (including the article images and facts) can be freely used under Attribution-ShareAlike license, unless stated otherwise. Cite this article:
New Slains Castle Facts for Kids. Kiddle Encyclopedia.