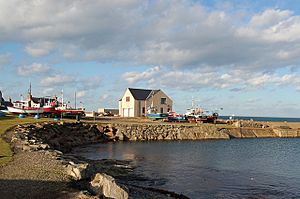 Rosehearty (Gaelic: Ros Abhartaich), Rizarty in the local dialect, is a village in Scotland. It is on the Moray Firth coast, four miles west of the town Fraserburgh, in the county of Aberdeenshire.

The burgh has about 1,300 people, with about 25 per cent of pensionable age. There are two shops and three hotels in the village.

All content from Kiddle encyclopedia articles (including the article images and facts) can be freely used under Attribution-ShareAlike license, unless stated otherwise. Cite this article:
Rosehearty Facts for Kids. Kiddle Encyclopedia.