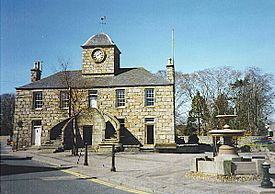 Kintore (/kɪnˈtɔər/; Gaelic: Ceann Tòrr) is a town and former royal burgh near Inverurie in Aberdeenshire, Scotland, now bypassed by the A96 road between Aberdeen and Inverness. It is situated on the banks of the River Don. Its Town House dates from 1747.

The name Kintore comes from the Gaelic, Ceann Tòrr. Ceann means the head, or the end, and Tòrr means a round hill. So the name signifies that the town was at the head or end of a round hill. This probably refers to Tuach Hill to the south of the town.

Established in the ninth century AD as a royal burgh, Kintore had its royal charter renewed by King James IV in 1506. But the area has clearly been a popular settlement since prehistoric times. Recent archaeological excavations show Neolithic finds dating to at least 5000 BC.

Nearby are the remains of Hallforest Castle, former stronghold of the Earls of Kintore.

NECR (North East Community Radio) is a local radio station based in School Road in Kintore (opposite the Torryburn Hotel).

Kintore is the site of Deers Den Roman camp and is thought to relate to Agricola's campaigns into Scotland; moreover, Deers Den is associated with the Severan invasion.Archaeologists say that the Kintore camp was definitely occupied in 120 AD and may have been occupied on as many as three occasions during the Scottish campaigns before lack of resources and more pressing matters elsewhere in the Roman Empire induced consolidation and retreat.

The Romans, it is believed, were attracted by the belief that Scotland was rich in natural resources, including gold, silver and tin. The Deer's Den camp could have been involved in the preparations for the decisive battle of Mons Graupius; however, most researchers argue that the site of Mons Graupius was further south in Aberdeenshire, possibly near Raedykes at Kempstone Hill or Megray Hill.

Arriving from the south, Roman legions marched from Raedykes to Normandykes Roman Camp through the Durris Forest as they sought higher ground, evading the bogs of Red Moss and other low-lying mosses associated with the Burn of Muchalls. That march used the Elsick Mounth, one of the ancient trackways crossing the Mounth of the Grampian Mountains, lying west of Netherley.

All content from Kiddle encyclopedia articles (including the article images and facts) can be freely used under Attribution-ShareAlike license, unless stated otherwise. Cite this article:
Kintore, Aberdeenshire Facts for Kids. Kiddle Encyclopedia.