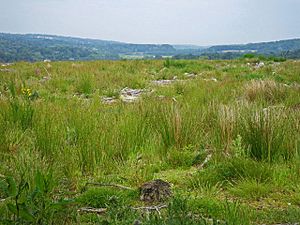 Normandykes (Grid Reference: NO 830994) is the site of a Roman marching camp 1 mile (1.6 km) to the southwest of Peterculter, City of Aberdeen, Scotland. The near-rectangular site, measuring approximately 860 by 510 metres (940 by 560 yd), covers about 106 acres (43 ha) of the summit and eastern slopes of a hill overlooking the River Dee and the B9077 road further south. Aerial photographs for Normandykes have been archived between 1947 and 1976. The camp is about 6 miles (10 km), or less than half a day's march, north of the Raedykes camp. It is possible that the actual route taken would have entailed one day's march, over a route likely chosen to avoid the Red Moss, a virtually uncrossable bog near the present day village of Netherley. Normandykes was first excavated in the year 1935 by Richmond and MacIntyre; construction is thought to date to the Antonine or Severan periods.

The site is designated a scheduled ancient monument.

All content from Kiddle encyclopedia articles (including the article images and facts) can be freely used under Attribution-ShareAlike license, unless stated otherwise. Cite this article:
Normandykes Facts for Kids. Kiddle Encyclopedia.