Peterhead (; Scottish Gaelic: Ceann Phàdraig, Scots: Peterheid ) is a town in Aberdeenshire, Scotland. It is Aberdeenshire's biggest settlement (the city of Aberdeen itself not being a part of the district), with a population of 18,537 at the 2011 Census. It is also the largest fishing port in the United Kingdom for total landings by UK vessels, according to a 2019 survey.

Peterhead sits at the easternmost point in mainland Scotland. It is often referred to as The Blue Toun (locally spelled "The Bloo Toon") and its natives are known as Bloo Touners. They are also referred to as blue mogganers (locally spelled "bloomogganners"), supposedly from the blue worsted moggans or stockings that the fishermen originally wore.

Peterhead was founded by fishermen and was developed as a planned settlement. In 1593 the construction of Peterhead's first harbour, Port Henry, encouraged the growth of Peterhead as a fishing port and established a base for trade.

Peterhead was a Jacobite supporting town in the Jacobite risings of 1715 and 1745. In particular, it was one of the Episcopalian north-eastern ports where reinforcements, plus money and equipment, were periodically landed from France during the Forty-Five.

A lifeboat station was first established in 1865. Since early times Peterhead has received a portion of its water supply from Morris Wells. Peterhead convict prison was opened in 1888, gaining a reputation as one of Scotland's toughest prisons.

A new phase of growth was initiated in the 1970s with Peterhead becoming a major oil industry service centre, and the completion of the nearby St Fergus gas terminal. At this time, considerable land holdings were allocated for industrial development.

In recent times, the town has suffered from several high-profile company closures and is facing a number of pressures, including Common Fisheries Policy reforms. However, it retains a relatively diverse economy, including food processing, textiles, service industries and, still importantly, fishing. (Over 90,000 tonnes of fish, with a value of around £60m are now landed at Peterhead, which is still also base to over 550 fishermen.) The Peterhead Port Authority plans to extend the northern breakwater as a stimulus to the town's economic development. In addition, to assist with business diversification and town centre environmental improvements, the 'Peterhead Project' initiative under the Aberdeenshire Towns Partnership brings together the Council, Scottish Enterprise Grampian, Communities Scotland, commerce and community representatives.

Until April 2005, the Royal Air Force station RAF Buchan was located near the town.

Peterhead has a number of in-town and out-of-town bus services.

Peterhead is further from a railway station (32 miles from Aberdeen) than any other town of its size in Great Britain. The town once had two stations Peterhead railway station and Peterhead Docks railway station. Passenger trains on the Formartine and Buchan Railway stopped in 1965 under the Beeching Axe, and freight in 1970. The start of reconstruction of the Borders Railway to Galashiels (early 2013) has begun a local political debate into the possibility of reopening the line from Aberdeen to Fraserburgh and Peterhead.

The nearest airport with scheduled services is Aberdeen Airport. A heliport has been set up at the Eastern end of the former RAF Buchan air base. Recreational aviation also takes place from a part of a former runway. 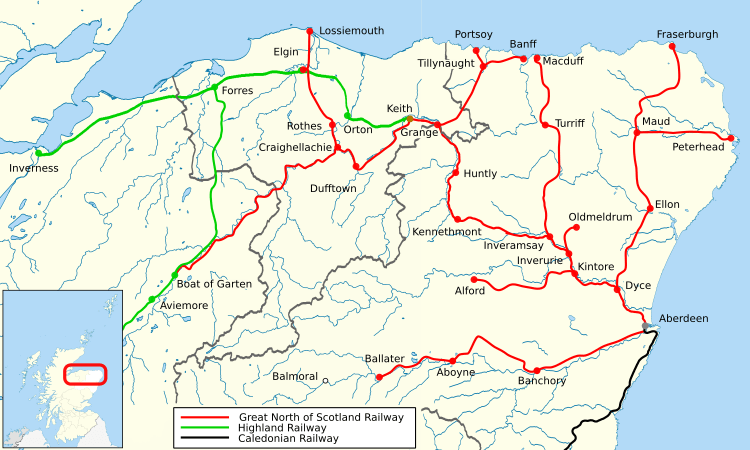 The Great North of Scotland Railway with other railways in 1867. 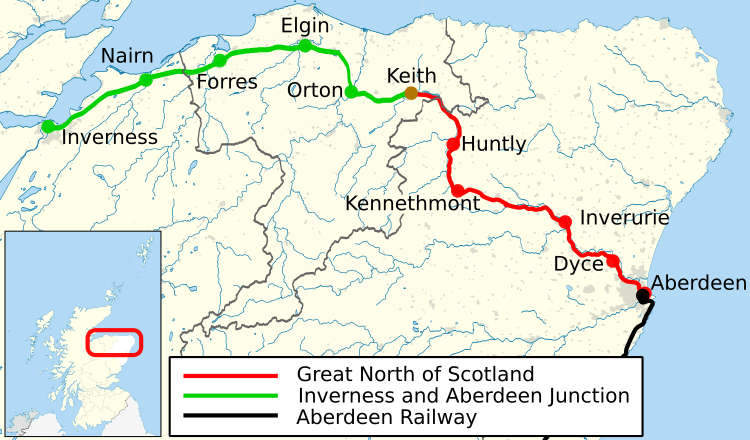 In 2008, a Blueprint for Growth was published – a plan to extend the town beyond its bypass. The plan involved 4500 homes, 4 new primary schools, a new secondary school and a new hospital to be built in the next 20–25 years – hoping to bring 9000 people to the town. 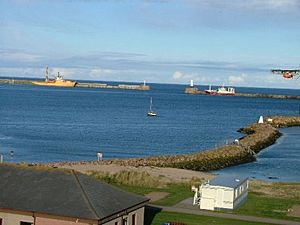 View of Peterhead bay, looking towards the breakwaters 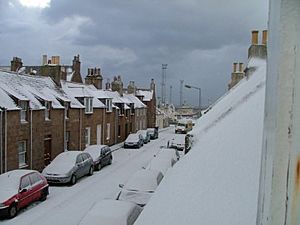 Merchant Street with the Harbour in the background

The harbours, maritime and built heritage are the town's principal tourism assets. Recent initiatives include investments in the Peterhead Bay area, which have included the berthing of cruise ships in the harbour. A number of projects are planned under the auspices of the Peterhead Project initiative, including tourism strategy development, enhancement of existing attractions, measures to improve the town's physical attractiveness, and improved marketing and promotion.

Peterhead has a thriving port, serving the fishing, oil and gas and other commercial industries. It also receives many visiting seafarers arriving on ships that ply these trades. Seafarers' welfare organisation Apostleship of the Sea has a port chaplain at Peterhead to provide pastoral and practical support to them.

The town is also mentioned in Jules Verne's science-fiction novel 'A Journey to the Centre of the Earth' (1864).

The 2016 population estimate for the town is 19,270, making Peterhead the largest town in Aberdeenshire. English is the primary language of residents, although 56.4% can speak Scots.

Peterhead Academy houses around 1,300 pupils and the school is split into six houses (Arbuthnot, Buchan, Craigewan, Grange, Marischal and Slains), with all the names associated with areas of the town. The school has pupils coming from surrounding villages such as Boddam, Cruden Bay, Hatton, Inverugie, Rora, St Fergus and Crimond. The academy's motto is "Domus Super Petram Aedificata" (A House Built on a Rock). The academy is one of Scotland's largest schools at over 22,920 m2 (246,700 sq ft) of gross internal floor area. The school has multiple subjects such as ICT, English, French/German, technical, engineering, art, home economics, and many more.

There is one special school, Anna Ritchie, which caters for most specific learning difficulties, autism and other disabilities.

Peterhead F.C. is a Scottish Professional Football League club that plays in the League One. They won the League Two championship in 2013–14 and 2018–19. The club reached the final of the Scottish Challenge Cup in the 2015–16 season.

Peterhead Golf Club, reputedly the 18th oldest in the world, sits on the banks of the River Ugie at its estuary with the North Sea, just over a mile to the north-west of the town. It has an 18- and a 9-hole course.

Peterhead RFC is a Scottish Rugby Union team that plays at the Lord Catto playing fields.

All content from Kiddle encyclopedia articles (including the article images and facts) can be freely used under Attribution-ShareAlike license, unless stated otherwise. Cite this article:
Peterhead Facts for Kids. Kiddle Encyclopedia.