Turriff is a town and parish in Aberdeenshire, Scotland. It is approximately 166 feet above sea level. It is known locally as Turra in the Doric dialect of Scots. The name appears to be Scottish Gaelic in origin, from "torr" meaning a mound or round hill, or "tur" meaning a tower. 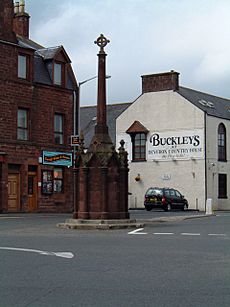 The Knights Templar appear to have had a base in the area, and a nearby site is still known as "Temple Brae".

Early in 1639, the Marquis of Huntly assembled his forces here, and thereafter went to Kintore in lower Aberdeenshire, eventually marching from there to Aberdeen itself. The Marquis — being informed shortly after his arrival in Aberdeen that a meeting of Covenanters was to be held in Turriff on the fourteenth of February — resolved to disperse them, by occupying the town with 2000 men. The incident was known as the "First raid of Turray".

All content from Kiddle encyclopedia articles (including the article images and facts) can be freely used under Attribution-ShareAlike license, unless stated otherwise. Cite this article:
Turriff Facts for Kids. Kiddle Encyclopedia.