Savick Brook is a watercourse in Lancashire, England, which runs from the outskirts of Longridge westward north of Preston to the River Ribble. 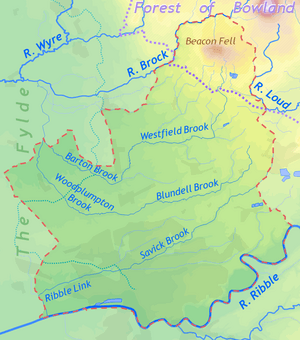 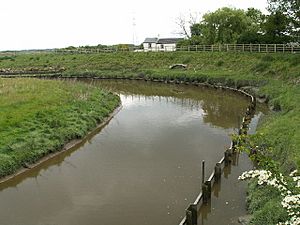 The Ribble Link along the course of Savick Brook

Most of the underlying geology for the brook's water basin is Triassic rock consisting of red Sherwood sandstone, with a faulted boundary with the carboniferous rocks to the east of Preston. The upper part of Savick Brook around Longridge lies in a carboniferous area of Millstone Grit. Glacial drift deposits, principally till (boulder clay) also cover much of the area.

A number of smaller waterways flow into the brook, including: 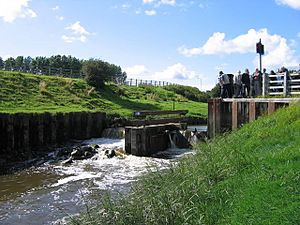 In December 2000 construction began to turn a 4 mi (6.4 km) section of the brook west of Cottom Mill bridge into a navigation canal as part of the Ribble Link, a scheme to connect the previously isolated Lancaster Canal to the River Ribble. Opened in July 2002, the Link has a series of nine locks to allow small craft and narrowboats up to 61.8 ft (18.8 m) in length and 7.5 ft (2.3 m) in width to transit between the two waterways.

There are a number of monitoring stations along the brook which measures its water level and at which samples are taken to determine water quality:

A survey by the Environmental Agency in May 2001 determined that the waters of the brook were of a poor quality (River Ecosystem Classification 3 and 4 and General Quality Assessment (GQA) grades D and E)(section 4.2), particularly from sewer discharges and overflows. As a result, United Utilities were committed to carrying out a series of improvements to the Preston Sewerage System over the subsequent years to improve water quality through fewer discharges from combined sewer overflows.

A study by the Department for Environment, Food & Rural Affairs (defra) in August 2012 found that the water quality of the brook was:

The study also found a noticeable decrease in water quality in wet periods, further deteriorating in the brook's downstream waters. Furthermore, in the May 2001 to September 2011, there was a significant decline in the numbers of rheophillic fish (i.e. barbel, chub and dace). It was defra's belief that the primary contributing factors were agricultural outflows (mostly dairy farming) and sewerage discharges, with a noted rise in consensual sewerage discharges.

Sections of the brook, especially around the confluence with the Ribble, are popular with recreational anglers. A survey by the Environmental Agency in May 2001 determined that the waters of the brook are of a suitable quality for self-sustaining populations of coarse fish, with eleven (11) different species identified:

The survey noted that the brook has a surprisingly high number of fish populations despite the pollution risks from the adjoining farmlands and urban areas, and seems particularly well suited to sustaining chub. Furthermore, it stated that flounder, which is a marine species, utilises the brook extensively as a nursery area.

All content from Kiddle encyclopedia articles (including the article images and facts) can be freely used under Attribution-ShareAlike license, unless stated otherwise. Cite this article:
Savick Brook Facts for Kids. Kiddle Encyclopedia.