Fulwood is an area and unparished area in Lancashire, England, forming much of the northern half of the unparished part of the City of Preston district. It had a population of 28,535 in 2011 and is made up of five wards.

For several reasons, despite its close proximity to Preston, it has remained distinctly separated. Historically, Fulwood was governed independently from Preston until 1974. Furthermore, since the majority of the area is encompassed under The Fulwood Conservation Area, it has remained geographically separate from Preston.

Fulewde, 1199; Fulewude, 1228; Fulwode, 1297. The extract below by John Marius Wilson, Imperial Gazetteer of England and Wales (1870–72) described Fulwood and its history during its early Victorian foundations: "FULWOOD, a township-chapelry in Lancaster parish, Lancashire; on the Lancaster and Preston railway, 1.5 mile N of Preston. It has a station on the railway; and its post town is Preston. Acres, 2077. Real property, £6,218. Pop. in 1851, 1,748; in 1861, 2,313. Houses, 172. This was part of the ancient royal forest of Fulwood, now enclosed; and Preston race-ground was part of it. Extensive barracks are here. The living is a vicarage in the diocese of Manchester."

Fulwood has expanded in the 20th century, and has been popular with housing and business developers, with its close links to the M6 and M55 motorways. Since the 1970s when the Central Lancashire New Town was proposed, large sites have been made available for development, such as Longsands, which is a residential area, and "East Preston", where many businesses are currently located, including the Lancashire Evening Post (LEP), Asda, Royal Mail sorting office, Independent Inspections, Xchanging, CPC, EDS and Holiday Inn. The B6241 (Eastway) provides a vital route, bypassing much of the residential and central areas of Preston, and a road via Longsands connects it to the M6 motorway (at junction 31A which was opened in the 1990s) and the Bluebell Way business park on the boundary with Brookfield.

It is also the home of the Royal Preston Hospital, Sharoe Green Hospital was also in Fulwood until its closure in 2004.

A notable former resident was Major John Rouse Merriott Chard, of the Royal Engineers, V.C., officer commanding at Rorke's Drift in 1879. He was posted to Preston between 1887 and 1892, and is recorded in the 1891 Census living at 80 Victoria Road, Fulwood.

Since the mass migration of Indians, Fulwood has been a popular place of residence for well-known, and wealthy families of the Vora Patel community, many of whom have resided here for several generations. Many families of this community amassed great wealths during the economic prosperity of the textiles industry in Northern England and, to this day, retain much of their wealth and have bought many of Lancashire's historic properties. 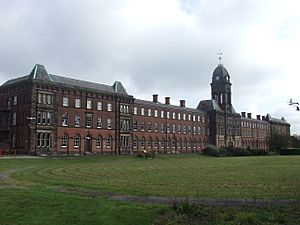 Fulwood is one of the greener parts of the Preston area, however it is nevertheless a fairly built up area, with buildings dating back to the Victorian gentrification of the region, and earlier. Due to large investments during the late Victorian era, Fulwood was an area of much development by wealthy Preston industrialists. Some of the finest Victorian buildings of Lancashire can be found in Fulwood, such as the Fulwood Barracks, Fulwood Union Workhouse, and Harris Orphanage. Many of the larger houses in Fulwood were also built during the Victorian period, particularly those in the Nooklands cul-de-sac.

There are cycle paths from Fulwood through Lancaster to Carnforth, as well as the Guild Wheel.

The local cricket teams are Grasshoppers CC (Social Side) and Fulwood & Broughton CC who play in the Palace Shield. In 2005 they were the most successful cricket side at club level in Britain, winning nine trophies between the senior and junior teams.

The local football team is Fulwood Amateurs F.C. who play in the West Lancashire League.

The local rugby team is Preston Grasshoppers R.F.C. who play in the national league structure.

The main campus of Preston's College is located in Fulwood on St Vincent's Road.

All content from Kiddle encyclopedia articles (including the article images and facts) can be freely used under Attribution-ShareAlike license, unless stated otherwise. Cite this article:
Fulwood, Lancashire Facts for Kids. Kiddle Encyclopedia.