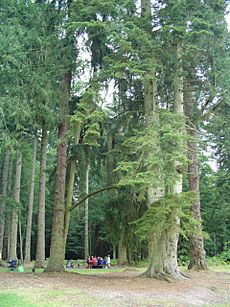 In the New Forest 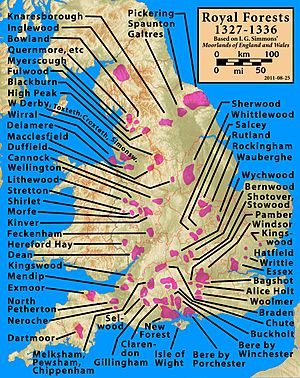 A royal forest is an area of land with various meanings, but basically it is woodland once owned by monarchs.

In Anglo-Saxon England, the kings were great huntsmen but they never set aside areas forbidden to other users. Historians find no evidence of the Anglo-Saxon monarchs (c.500 to 1066) creating forests.

However, under the Norman kings (after 1066), no hunting was allowed on Royal lands except by authority of the King. The law was designed to protect the venison and the vert, the "noble" animals of the chase – notably red and fallow deer, the roe, and the wild boar – and the greenery which sustained them.

Royal forests were designed as hunting areas reserved for the monarch or (by invitation) the aristocracy. The concept was introduced by the Normans to England in the 11th century, and in the late 12th and early 13th centuries, one-third of the land area of southern England was designated as royal forest. At one stage in the 12th century, all of Essex was afforested, and on his accession Henry II declared all of Huntingdonshire to be royal forest.

Afforestation, in particular the creation of the New Forest, figured large in the folk history of the "Norman Yoke":

"the picture of prosperous settlements disrupted, houses burned, peasants evicted, all to serve the pleasure of the foreign tyrant, is a familiar element in the English national story .... The extent and intensity of hardship and of depopulation have been exaggerated".

Forest law prescribed harsh punishment for anyone who committed any offence within the forests. Killing game was a capital offence. By the mid-17th century, enforcement of this law died out, but many English woodlands still bear the title Royal Forest. The practice of reserving areas of land for the sole use of the aristocracy was common throughout Europe during the mediaeval period.

Royal forests usually included large areas of heath, grassland and wetland – anywhere that supported deer and other game. In addition, when an area was designated forest, any villages, towns and fields that lay within it were also subject to forest law. Local inhabitants were restricted in the use of land they had previously relied on for their livelihood. However, common rights were not extinguished, but merely restricted.

All content from Kiddle encyclopedia articles (including the article images and facts) can be freely used under Attribution-ShareAlike license, unless stated otherwise. Cite this article:
Royal forest Facts for Kids. Kiddle Encyclopedia.