Clitheroe is a town and civil parish in the Borough of Ribble Valley, Lancashire, England, 34 miles (55 km) northwest of Manchester. It is near the Forest of Bowland, and is often used as a base for tourists visiting the area. In 2018, Clitheroe Built Up Area had an estimated population of 16,279.

The town's most notable building is Clitheroe Castle, said to be one of the smallest Norman keeps in Britain. Several manufacturing companies have sites here, including Dugdale Nutrition, Hanson Cement, Johnson Matthey and Tarmac.

The name Clitheroe is thought to come from the Anglo-Saxon for "Rocky Hill", and was also spelled Clyderhow and Cletherwoode. The town was the administrative centre for the lands of the Honor of Clitheroe. These lands were held by Roger de Poitou, who passed them to the De Lacy family, from whom they passed in 1311 to Thomas, Earl of Lancaster and subsequently, to the Duchy of Lancaster.

At one point, the town of Clitheroe was given to Richard, 1st Duke of Gloucester. Up until 1835, the Lord of the Honor was also by right Lord of Bowland, the so-called Lord of the Fells. The town's earliest existing charter is from 1283, granted by Henry de Lacy, Earl of Lincoln, confirming rights granted by one of his forebears between 1147 and 1177.

According to local legend, stepping stones across the River Ribble near the town are the abode of an evil spirit, who drowns one traveller every seven years.

During World War II, the jet engine was developed by the Rover Company. Rover and Rolls-Royce met engineers from the different companies at Clitheroe's Swan & Royal Hotel. The residential area 'Whittle Close' in the town is named after Frank Whittle, being built over the site of the former jet engine test beds.

There are three Anglican churches: the Parish Church of St Mary Magdalene is a traditional Anglican church on Church Brow on a limestone knoll; St James' Church has recently been refurbished; St Paul's is in the area of town known as Low Moor. The town also has a Roman Catholic community. There is St Michael and St John Church in the town. The majority of Roman Catholic children attend St Augustine's RC High School, Billington.

The Catholic saint, Margaret Clitherow, was not from Clitheroe but lived and was martyred in York. Trinity Methodist Church, part of the wider Methodist Circuit in Clitheroe and surrounding villages, is located on the edge of Castle Park in Clitheroe. There is also a URC church in the town, as well as the Clitheroe Community Church and Salvation Army citadel. In nearby Sawley there is a Quaker Meeting House.

There is a Muslim community in Clitheroe. After years of campaigning for a mosque in the town, permission was granted in December 2006, for the conversion of a former church at Lowergate into a multi faith centre, which has a Muslim prayer room. It is open for all faiths, to use the rest of the building. 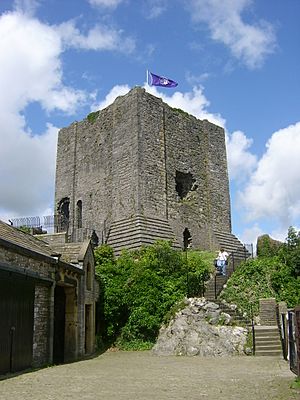 Clitheroe Castle is argued to be the smallest Norman keep in the whole of England. It stands atop a 35-metre outcrop of limestone and is one of the oldest buildings in Lancashire. It is also the only remaining castle in the county which had a royalist garrison during the English Civil War.

The castle's most prominent feature is the hole in its side which was made in 1649 as was ordered by the government. It was to be put in "such condition that in might neither be a charge to the Commonwealth to keep it, nor a danger to have it kept against them".

Dixon Robinson was in residence as Steward of The Honor of Clitheroe from 1836 until his death in 1878 and resided at the castle for the same period. His son Aurthur Ingram Robinson lived at the Castle after 1878, and inherited the Steward title too (see Honour of Clitheroe). 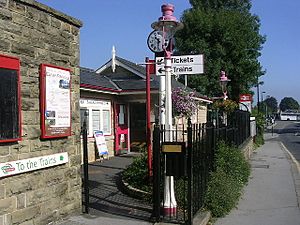 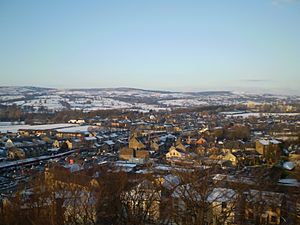 Clitheroe is well connected in terms of public transport links via Clitheroe Interchange.

There are hourly trains to Blackburn and Manchester Victoria and on to Rochdale from the railway station that are operated by Northern. Usually, services are operated by Class 150 trains, but sometimes Class 156, Class 158 and Class 153 operate the service. Regular passenger train services ceased in 1962, and resumed (though only south towards Blackburn) in 1994. The Ribble Valley Rail group (community rail group) is campaigning for services from Clitheroe to be extended north to Hellifield.

On Summer Sundays DalesRail trains run to Settle and Carlisle and The Ribble Valley Rambler runs as far as Hellifield in the winter months. A number of freight trains also pass through Clitheroe each week.

There are frequent bus services from Clitheroe Interchange to the surrounding Lancashire and Yorkshire settlements. Transdev Blazefield with its Blackburn Bus Company and Burnley Bus Company subsidiaries, is the most prominent operator, mainly operating interurban services to other towns in Lancashire, Greater Manchester and Yorkshire. Other operators include Pilkington Bus, Holmeswood Coaches and Stagecoach in Lancashire.

Clitheroe had a population of 14,765 and is made up of 5 wards (Salthill, Littlemoor, Edisford and Low Moor, St Mary's and Primrose). It has small Eastern European and Asian Populations which are both similar sizes.

Clitheroe is twinned with a small town in France. 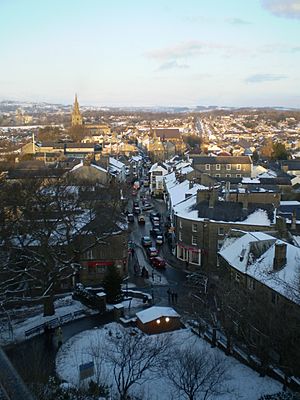 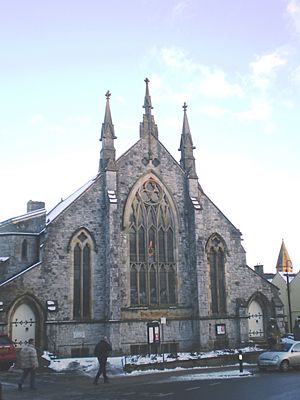 ICI founded a chemical plant in 1941, which was sold for a reported £260 million in September 2002, to Johnson Matthey. Conservatory manufacturer Ultraframe was started in Clitheroe, by John Lancaster in 1983. In March 1997, it floated on the stock exchange, being valued at £345 million in 2003. In June 2006, however, a downturn led to a takeover by Brian Kennedy's Latium Holdings.

Hanson Cement has been criticised for using industrial waste in its kilns, which some local inhabitants claim produces poisonous dioxins. The company claims that its filters remove these and that government inspectors have approved the plant. However, locals continue to campaign for the use of industrial waste as fuel to cease.

Another local firm, the family-owned animal feed producer Dugdale Nutrition can trace its history back to John Dugdale who was trading at Waddington Post Office in 1850. There are a number of industrial sites in and around Clitheroe, one of which is the expanded Link 59 Business Park to the north of the town, which accommodates Dugdale Nutrition, Clitheroe Auction Mart, Deli Solutions, Farm House Fayre, James Alpe, 3m, The Paper Cup Company, Ultra Frame, Trutex and Clitheroe Light Engineering.

There are numerous banks and building societies, including Lloyds Bank, Barclays, HSBC, and NatWest. Clitheroe has three jewellers, with Nettletons Jewellers being on the high street. In November 2000, Peugeot (Perrys) opened a dealership in the town, but it has since closed. Majestic Wine now occupies the site.

In May 2007, planning permission was granted for a Homebase, although the store didn't open until April 2009. In April 2015, work officially started on a new development, consisting of Aldi and Pets at Home. In October 2015, Aldi officially opened, with Pets at Home and Vets4pets following shortly afterwards.

Clitheroe has five supermarkets: Booths, Tesco, Sainsbury's (including an Argos), Lidl, and Aldi. There is a shopping arcade known as the Swan Courtyard, and two petrol stations, run by BP and Texaco (which includes a Subway). In May 2007, when Kwik Save entered administration, its store on Station Road closed. In September 2008, Booths bought the site, and expanded their store, where it currently houses charity shop YMCA.

Clitheroe had a population of 14,765 and is made up of 5 wards (Salthill, Littlemoor, Edisford and Low Moor, St Mary's and Primrose). It has small Eastern European and Asian Populations which are both of similar sizes. 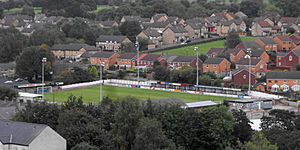 Clitheroe F.C. play in the Northern Premier League Division One North. Originally established in 1877 as Clitheroe Central, they play their home games at the Shawbridge Stadium. There is also a youth football club, Clitheroe Wolves, founded in 1992.

Cricket has been played in Clitheroe since the 1800s, with Clitheroe Cricket Club being formed in 1862 as an amalgamation of two sides, Clitheroe Alhambra and the local Rifles Corps. Based at Chatburn Road and members of the Ribblesdale League since its inception, the club won the league title and both the Ramsbottom and Twenty-20 cups in the 2006 season.

Golf The Clitheroe Golf Club was founded in 1891, and originally the course was at Horrocksford on land now quarried away. The current course was designed by James Braid, and play began in the early 1930s. It is located south of the town in the neighbouring parish of Pendleton. Clitheroe Rugby Union Football Club, formed in 1977, play at the Littlemoor Ground on Littlemoor Road in the town and run two adult rugby teams.

In August 2005, a cycle race, the Clitheroe Grand Prix, took place in the town, with Russell Downing finishing ahead of Chris Newton. In August 2006, Ben Greenwood won, with Ian Wilkinson second, but in April 2007, the council decided not to support another event, citing poor attendance. The town was also the start point of the second stage of the 2015 Tour of Britain.

Public sports facilities are available at Edisford, with the Ribblesdale Pool and Clitheroe Tennis Centre located there, along with a number of football pitches and netball courts. The site is shared with the Roefield Leisure Centre, developed and operated by a registered charity whose supporters began fund-raising in 1985.

In April 2006, Clitheroe Skatepark officially opened in the Castle grounds, built and funded by the Lancaster Foundation charitable trust. In June 2016, Clitheroe-raised mixed martial artist, Michael Bisping, won the UFC Middleweight Championship, by defeating Luke Rockhold by way of knockout in the first round of the fight. On 5 July 2019 he was inducted into The UFC Hall of Fame. He is the first English fighter to be inducted. 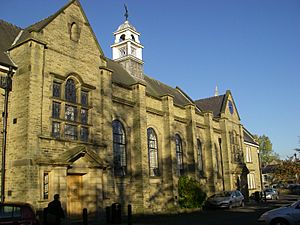 All content from Kiddle encyclopedia articles (including the article images and facts) can be freely used under Attribution-ShareAlike license, unless stated otherwise. Cite this article:
Clitheroe Facts for Kids. Kiddle Encyclopedia.