Barrow-in-Furness railway station is a railway station serving Barrow-in-Furness in Cumbria, England. It is the western terminus of the Furness Line to Lancaster and the southern terminus of the Cumbrian Coast Line to Carlisle, both of which connect to the West Coast Mainline. The station is owned by Network Rail and is operated by Northern, which provides all passenger train services. 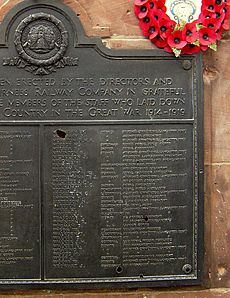 Services to the north are provided on Monday-Saturday by Northern, with services approximately hourly during the day to Whitehaven and Carlisle. One train per day operates to Sellafield specifically for workers at Sellafield nuclear plant (BNFL). Evening trains run only as far as Millom. There are 19 northbound departures each weekday; 15 of these go to Carlisle, three to Millom and one to Sellafield. There are 20 arrivals from the Northern part of the line: 15 from Carlisle, three from Millom, one from Maryport and one from Sellafield. Some of these services continue along the Furness Line to Lancaster and Preston.

To the south, there are stopping services to Lancaster (some go as far as Preston) and a few semi-fast services to Manchester Airport. These operate on a broadly hourly frequency, with a few peak extras throughout the week (including Sundays).

An improved Northern service was introduced at the May 2018 timetable change, including evening and Sunday services over the line to Whitehaven and Carlisle. More trains to/from Preston & Manchester Airport are planned to follow when rolling stock becomes available.

Platform 1, which contains the entrance to the station, is used primarily for Northern Rail through trains (from Lancaster/Preston to Carlisle) heading north, and trains heading to/arriving from Preston and Manchester Airport. The platform has a waiting area, the ticket office and information office and toilets, along with the cafe (run by Cafexpress), all of which have been recently renovated. In early 2012, the platform was also presented by pieces of artwork of the local area by the Mayor of Barrow and the Barrow and Furness MP.

Platform 2 is mainly used for Northern services heading south to Lancaster or Preston, and local trains arriving from Millom/Sellafield.

Platform 3 is a bay platform that can only be used by northbound trains to Millom and Carlisle. It is used several times each day.

In between Platforms 2 and 3 is an indoor waiting area, with live departures indicator, a vending machine and speakers. Further up and down the platform are printed timetables; the rest of the buildings contain offices for staff and British Transport Police.

There is a Northern train crew depot at the station and there are a number of sidings to the north used for servicing and stabling empty DMUs.

The station has recently been renovated, with replacement of most of the old seating and waiting areas, and replacement of the ageing automatic doors within the station. Electronic information signs have been installed, along with improved CCTV after several incidents on the station. Ramps have been provided for access, and this is continuing with provision of better access to Platforms 2 and 3, which previously would have been accessible only via the very end of the platform. The station restaurant is also being upgraded.

In the Railway Series books by the Rev. W Awdry, and the adapted television series Thomas & Friends, Barrow Central is the mainland terminus for the Fat Controller's or North Western Railway, and is connected to the fictional Island of Sodor by a bridge to Vickerstown or as it is known in the books Vicarstown.

All content from Kiddle encyclopedia articles (including the article images and facts) can be freely used under Attribution-ShareAlike license, unless stated otherwise. Cite this article:
Barrow-in-Furness railway station Facts for Kids. Kiddle Encyclopedia.