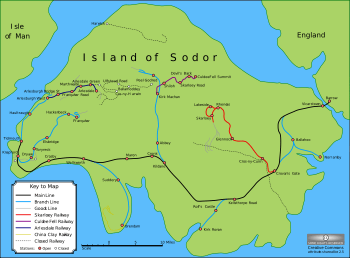 A map of the Island of Sodor showing the railway system

Sodor is a fictional island in the Irish Sea used as the setting for The Railway Series books by the Rev. W. Awdry, and later used in the Thomas the Tank Engine and Friends television series.

All content from Kiddle encyclopedia articles (including the article images and facts) can be freely used under Attribution-ShareAlike license, unless stated otherwise. Cite this article:
Sodor (fictional island) Facts for Kids. Kiddle Encyclopedia.