Lancaster Priory, formally the Priory Church of St Mary, is the Church of England parish church of the city of Lancaster, Lancashire, England. It is located near Lancaster Castle and since 1953 has been designated a Grade I listed building. It is in the deanery of Lancaster, the archdeaconry of Lancaster and the Diocese of Blackburn. Its benefice is combined with that of St John and St Anne.

It is likely that a Roman building existed on the site prior to others, possibly around the year 200. A Saxon church is thought to have stood on the site from the sixth century. In 1912 excavations revealed a wall beneath the present chancel area which may be from Roman times, and a small Saxon doorway has been exposed in the west wall of the present nave.

In 1094 Roger de Poitou established a Benedictine priory, dedicated to St Mary, as a cell of the Abbey of Saint Martin of Sées in Normandy, France. Around 1360 the nave was widened to about 49 feet (15 m). In 1431 the church was transferred from Sées to Syon Abbey near London, and following this there was a major reconstruction in Perpendicular style. In 1539 this Catholic monastic institution was abolished by Henry VIII and the following year the priory became a parish church. A restoration of the church occurred in 1558.

In 1743 it was decided to raise the steeple 10 yards higher so that the bells could be heard better, and the bells were also to be re-cast. In 1753, the tower was determined to be in danger of falling down, so the bells were removed from it. Henry Sephton was commissioned to demolish and rebuild the tower. In 1759 a new tower was erected, which still stands.

An organ was installed between 1809 and 1811 by George Pike England for a cost of £672. Between 1868 and 1871 the local architects Paley and Austin restored the chancel, and added a new organ chamber and vestry. In 1872 the old organ had been replaced by a new one in the north aisle. In 1887 a peal of eight new bells, donated by James Williamson, was rung for the first time and in 1894 a clergy vestry was built adjacent to the choir vestry. A south porch designed by Austin and Paley was added in 1903 and in the same year an outer north aisle with a polygonal apse was built. This aisle forms the memorial chapel to the King's Own Royal Lancaster Regiment. In 1922 the organ was rebuilt by Harrison & Harrison of Durham. In 1972 the bells were overhauled and re-hung. The pipe organ was replaced in 1982 by an electronic organ made by J. and J. Makin, and in the same year the choir and clergy vestries were converted into a refectory.

The church is built in sandstone with roofs of slate and lead. Its plan consists of a west tower, a four-bay nave and a four-bay chancel with a clerestory under a continuous roof, a north and south aisles and a south porch. At the east end of the north aisle is St Nicholas' chapel and at the east end of the south aisle is St Thomas' chapel. To the north of the north aisle, occupying the west four bays, is the King's Own Regiment Memorial chapel and to the east of this is the refectory and kitchen. The tower is in four stages surmounted by corner pinnacles and an embattled parapet. In the first stage is a south doorway and above this in the second stage is a four-light window. The third stage has a round window above which is a clock face. The bell openings in the fourth stage have four lights. The parapets of the aisles and nave are embattled. The south porch has two storeys with a staircase turret to the east, and crocketed pinnacles. The east window has five lights and Perpendicular tracery. 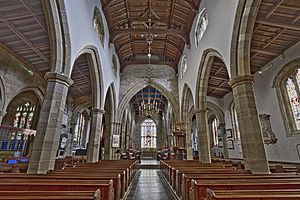 The carved choirstalls are of oak and, dating from 1340, are the third oldest in England. Pevsner states that they are "about the most luxuriant canopies in the country". The seats have misericords, some of which have carvings. At the back of the stalls are modern embroidery panels. The carved pulpit dates from 1619. It was originally a three-decker pulpit with a canopy surmounted by a crown on a Bible. In 1999 the canopy was reinstated, using the original crown. The stone base of the font was installed in 1848 and its carved wooden cover is dated 1631. The three brass chandeliers are dated 1717. The stained glass in the east window was designed by Edward Paley and made by Wailes. The church plate includes four flagons, a chalice and two breadholders dated 1678–79, a small chalice presented in 1728 and a cup dated 1757.

Runic cross found at Lancaster, now in the British Museum

In 1807 a runic cross was found while digging in the churchyard. The cross is 3 feet in length, and 1 foot 9 inches across. The Anglo-Saxon Runic inscription translates to "Pray ye for Cynibald Cuthburuc". Following a meeting of the British Archaeological Association in Lancaster, the cross was moved to the British Museum in 1868. A replica of the cross is now on display near the south west door of the priory.

The church holds the usual services of an Anglican church, the civic ceremonies of a city's parish church, and occasional concerts, and the church is open for visitors. There is a bookshop open during the summer season at the back of the church and in the bottom of the tower is the artist in residence whose work focuses on portraits of 'priory people'; her work has been exhibited in a number of local art galleries. Lancaster Priory is a member of the Greater Churches Group.

All content from Kiddle encyclopedia articles (including the article images and facts) can be freely used under Attribution-ShareAlike license, unless stated otherwise. Cite this article:
Lancaster Priory Facts for Kids. Kiddle Encyclopedia.