Standish is a village in the Metropolitan Borough of Wigan, Greater Manchester, England. Within the boundaries of the historic county of Lancashire, it is on the A49 road between Chorley and Wigan, near Junction 27 of the M6 motorway. The population of the village was 13,278 in the 2011 census. 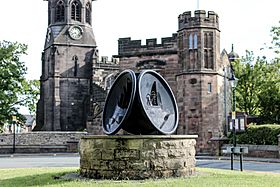 The parish church of St Wilfrid's in the centre of Standish

Formed around a crossroads, the village has grown as urban expansion between Manchester and Liverpool extends outwards. St Wilfrid's Church is a Grade I listed parish church.

The name Standish is derived from two Old English words stan, meaning stone, and edisc, a park or enclosure. Its name has been variously recorded as Stanedis in 1206, Stanediss in 1219, Standissh, Stanedich and Stanedissh in 1292 and Standisch in 1330. Langtree was recorded as Langetre in 1206 and Longetre in 1330. A Roman road passed through the township.

Standish and Langtree were part of the Penwortham barony in the 12th century and between 1150 and 1164, Richard Bussel, Lord of Penwortham gave them to his brother-in-law Richard Spileman. In 1212 Thurstan Banastre held them and later they were held by William de Ferrers Earl of Derby, and then by 'the lords of Leylandshire'. The tenants adopted the local surnames, Standish and Langtree.

In 1896 the Wigan Coal and Iron Company owned the Broomfield, Giant's Hall, Gidlow, John, Langtree, Robin Hill, Swire and Taylor Pits. The largest of these was the Langtree Pit with over 540 employees.

Standish lies to the south and Langtree to north of the area, Standish covering 1,696 acres, and Langtree which had two separated portions, 1,568 acres, a total of 3,264 acres. The River Douglas and Bradley Brook form the boundary on the eastern side, the Mill Brook which flows into the Douglas forms the western boundary. Standish is situated on a ridge of high land which rises to 370 feet and runs north to south across the township, near the river the land is between 120 to 160 feet. The underlying rocks are the coal measures of the Lancashire Coalfield.

Standish is on the A49 road between Chorley and Wigan, a short distance from Junction 27 of the M6 motorway. 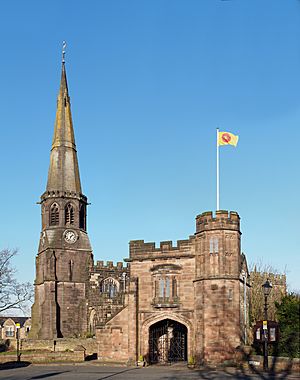 The Parish Church of St Wilfrid is the only Grade I listed building in the Metropolitan Borough of Wigan. 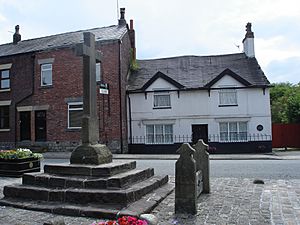 St Wilfrid's Parish Church is the only building with a Grade I listing in the Metropolitan Borough of Wigan.

In the Market Place in front of the church is a late medieval cross, stone stocks and a 14th-century well, latterly used for washing.

Standish has a population of 13,278 people, based on the 2011 census, this represents 4.2% of the population of Wigan Borough. There is a higher than average number of residents over the age of 65, representing 19.9% of the population. It is an affluent community with seven out of the nine areas appearing within the top 30% most affluent in England. 80% of residents own their homes or have a mortgage; only 10% of households live in social housing. 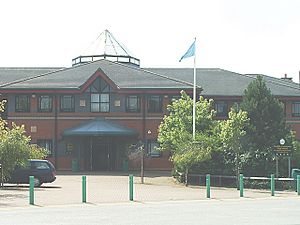 Standish has a library in the village centre.

Standish is on the Wigan to Chorley bus route with the Arriva North West 362 and Stagecoach Manchester 113 buses stopping every 20 minutes. It is also served by the 640 and 641 Standish Circular routes operated by Diamond North West.

Standish has a number of footpaths and cycling routes. Standish Mineral Line, locally known as 'The Line', was upgraded in 2018 as part of the Standish Cycleway project. The former railway line runs from the village centre to the former Robin Hill Colliery near Shevington Moor.

All content from Kiddle encyclopedia articles (including the article images and facts) can be freely used under Attribution-ShareAlike license, unless stated otherwise. Cite this article:
Standish, Greater Manchester Facts for Kids. Kiddle Encyclopedia.