i/ˈsændbætʃ/) is a market town and civil parish in the unitary authority of Cheshire East and the ceremonial county of Cheshire, England. The civil parish contains four settlements; Sandbach itself, Elworth, Ettiley Heath and Wheelock.

Sandbach is perhaps best known as the original home of Foden and ERF lorries, though neither company now exists in the town, 12-times National Brass Band Championship winners, Foden's Band, the ancient Saxon Sandbach Crosses and Sandbach services on the M6 motorway.

Known as Sanbec in 1086, Sondbache (also Sondebache) in 1260, and Sandbitch in the 17th–18th centuries, Sandbach derives its name from the Anglo-Saxon sand bæce, which can mean "sand stream" or "sand valley".

Traces of settlement are found in Sandbach from Saxon times, when the town was called Sanbec. Little is known about the town during this period, except that it was subjected to frequent Welsh and Danish raids. The town's inhabitants were converted to Christianity in the 7th century by four priests: Cedda, Adda, Betti and Diuma. The town has an entry in the Domesday Book from 1086, at which time it was sufficiently large to need a priest and a church. The entry states:

By the 13th century, during the reign of King John, much of the land around the township of Sandbach was owned by Richard de Sandbach who was the High Sheriff of Cheshire in 1230. Richard de Sandbach specifically owned a manor; he claimed an interest in the living of Sandbach. This claim against Earl Randle de Blundeville was unsuccessful. His son, John, however, was slightly more successful as he won an 'interest' temporarily against the Abbot of Dieulacres, only for it to be lost when it went to the King's Bench. 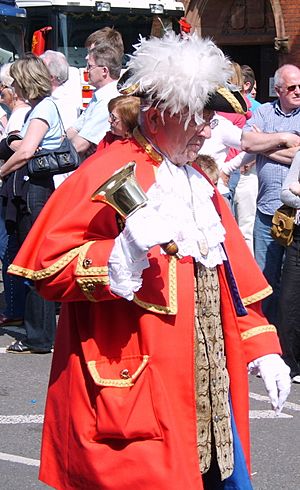 The manor in Sandbach passed through numerous families, including the Leghs and Radclyffes. It was eventually bought by Sir Randulph (or Randle) Crewe, who became the Lord of the Manor.

Sandbach has been a market town since 1579 when it was granted a Royal Charter by Elizabeth I due to the petitioning of Sir John Radclyffe of Ordsall who, as the largest landowner in Sandbach and the owner of the Sandbach Old Hall, encouraged the farmers of the area to hold a market in the town on Thursdays. The charter also allowed for right to establish a Court-leet and a Court of Pied-powder. The original charter is still preserved, and can be found in Chester; a reproduction can be found in the Sandbach Town Council chamber, which is at the Literary Institution. The charter also granted the town the right to hold two annual fairs, which lasted for two days, and were held around Easter and early September. The Thursday market is still held outdoors on Scotch Common, and in and around the town hall.

During the 17th century, the town used to be famous for its ale:

The ale brewed at this town was formerly in great repute in London, where, about the middle of the last century, it sold for twelve-pence a bottle, but it seems to be entirely supplanted by the Dorchester beer, and the Yorkshire and Welch ales, insomuch that we do not know of any Sandbach ale being now sold in the metropolis.

And about 1621 William Webb writes that "Our ale here at Sandbach being no less famous than that [at Derby] of a true nappe".

During the Wars of the Three Kingdoms, a Scottish army swept down into England before being forced to retreat at the Battle of Worcester. On 3 September 1651 Sandbach summer fair was being held, and a Scottish army of around 1,000 exhausted cavalry men passed through the town; this army had been under the command of David Leslie. The town was not an easy retreat route, however, as the people of Sandbach and the market stallholders attacked the Scottish army. A newspaper of the time said:

The dispute was very hot for two or three houres, and there were some townsmen hurt and two or three slaine, the Townesman slew about nine or ten and tooke 100 prisoners.

This was the only notable event of the Civil War to have happened in Sandbach. As the fair and the fight took place on the common of the town, after this event the common gained the name Scotch Common.

In 1936 parts of the area of Bradwall, all of Elton and Wheelock were added, significantly increasing the size of the parish. The hamlets transferred from Bradwall were Boothlane Head, Brickhouses, Ettiley Heath, Forge Fields, Hindheath, Elworth and Marsh Green. By 1951 the population had reached 9,253. In 1933 the ERF lorry company was founded.

During Warship Week in December 1941 Sandbach adopted HMS Vimiera as its affiliated ship. The Vimiera was lost on 9 January 1942 when it was sunk by a mine in the Thames Estuary off East Spile Buoy with the loss of 96 hands.

As with most of the United Kingdom, Sandbach has an oceanic climate.

The distance from London to Sandbach is 171 miles (275 km). The nearest large town is Crewe, which is 6 miles (10 km) to the south-west by road and can be reached either via the A534 Wheelock/Haslington bypass or via Winterley and Haslington. The nearest city is Stoke-on-Trent in the neighbouring county of Staffordshire, approximately 15 miles (24 km) away by road. The town is served by the M6 motorway, junction 17 and Sandbach Station on the Crewe to Manchester mainline. 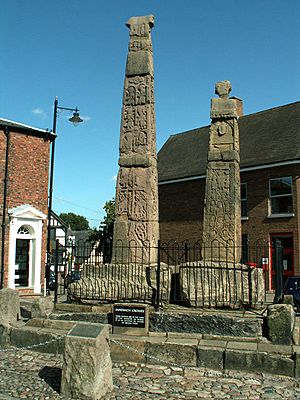 Sandbach has an important historical feature on the cobbled market square, two Saxon crosses that were reportedly built in the 7th, 8th or 9th century. The crosses are Scheduled Ancient Monuments. A plaque near the crosses reads:

Saxon crosses completed in the 9th century to commemorate the advent of Christianity in this Kingdom of Mercia about AD 653 in the reign of the Saxon king Penda. They were restored in 1816 by Sir John Egerton after destruction by iconoclasts.

Sandbach is also home to many listed buildings, including Sandbach School, St Mary's Church and the Old Hall Hotel. Many of the local public houses, which were formerly stage coach stops, are listed, for example the Lower Chequer. Many of the buildings of the town were designed by the renowned architect Sir George Gilbert Scott; he designed Sandbach Literary Institution, Sandbach School, St John's, Sandbach Heath and the Almshouses. He also restored St Mary's Church. The town has Methodist, Baptist, Anglican and Catholic churches.

Natural England, has designated Sandbach Flashes, a group of 14 separate areas, as a Site of Special Scientific Interest (SSSI), described as:

"a site of physiographical and biological importance. It consists of a series of pools formed as a result of subsidence due to the solution of underlying salt deposits [..] that show considerable variation in their plant and animal communities".

At least 225 species of bird have been recorded on the Flashes.

The town is served by Sandbach railway station, on the Crewe to Manchester Line, with services operated by Northern to and from as far north as Manchester Oxford Road although there is a branch line north of the station leading to Northwich which is mainly used by goods traffic and express passenger trains heading to Chester while the North Wales Coast Line is unavailable between the city and Crewe, although some organisations have been campaigning for a local passenger service between the two stations. The railway station itself is located to the west of the town in Elworth.

Pressure of road traffic going from Greater Manchester to Crewe has forced the building of a bypass for Sandbach, Wheelock, Wheelock Heath, Winterley and Haslington for the A534. This is largely due to the M6 motorway which has a junction (J17) at Sandbach, which is close to the RoadChef service station.

Local bus services are provided by Arriva and D&G Bus and Coach.

Sandbach has an annual transport festival which usually takes place during April. It originally started in 1992 as ‘Transport Through the Ages Parade’, and was such a success that it became an annual event; since its inception it has been run alongside the National Town Criers’ competition. The Festival is run by an organising committee made up of local councils and volunteers.

Sandbach Voices is a local choir that was founded in 1947 and is a registered charity. The choir's mission is to bring choral music into the community, and it regularly stages concerts, often in Sandbach Town Hall or at St Mary's Church.

At the end of November every year the Christmas lights are turned on by the chairman of the town council.

Local newspapers distributed in Sandbach include, The Chronicle (Sandbach & Middlewich edition) published on Wednesdays (and now incorporated into the Crewe Chronicle), the Chronicle Series paper Sandbach Chronicle published on Thursdays, Crewe Guardian on Thursdays, the South Cheshire Advertiser, and the daily Sentinel (Cheshire edition). The Saxon is a free 8-page bimonthly delivered to 7,000 homes, and the Sandbach & District Talking Newspaper is a weekly local talking newspaper aimed at assisting the visually impaired, with over 1000 issues since its first issue in December 1986.

South Cheshire is served by BBC Radio Stoke. It is also in the broadcast area of Cheshire FM, Macclesfield based Silk FM and Stoke-on-Trent-based Signal 1 and Signal 2.

All content from Kiddle encyclopedia articles (including the article images and facts) can be freely used under Attribution-ShareAlike license, unless stated otherwise. Cite this article:
Sandbach Facts for Kids. Kiddle Encyclopedia.