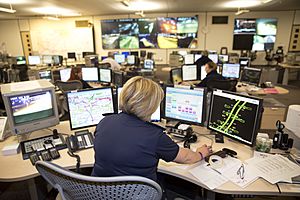 Managed motorways in the United Kingdom are motorways which use active traffic management. Their aim is to increase traffic capacity at times of peak traffic flow. They use variable speed limits and hard shoulder running at busy times. A "hard shoulder" is an inner lane which in normal times is only used for emergencies.

All content from Kiddle encyclopedia articles (including the article images and facts) can be freely used under Attribution-ShareAlike license, unless stated otherwise. Cite this article:
Managed motorway Facts for Kids. Kiddle Encyclopedia.