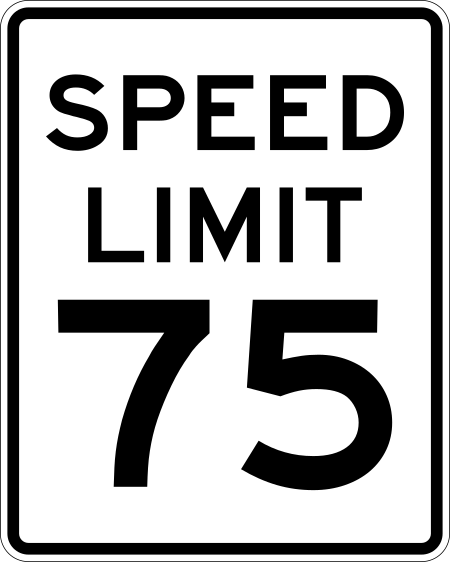 A speed limit is a legal limit on how fast a road vehicle can be driven. Some roads also have a minimum speed limit, which is how slow a vehicle is allowed to travel.

Reducing speed allows to reduces the number of accidents by giving more time to the driver to manage its vehicle, and reduces the consequences of an accident by reducing the energy involved in that crash.

Nowadays, in the European Union, speed limit may vary from country to country or from region to region. Typical speed limits are 130 km/h or 120 km/h on rural motorways, between 80 and 100 km/h for rural roads, 70 km/h on point requiring a reduced speed, 50 km/h in main urban roads, and 30 km/h on residential urban areas.

Germany does not have a general speed limit for motorways, but a recommended speed of 130 km/h. 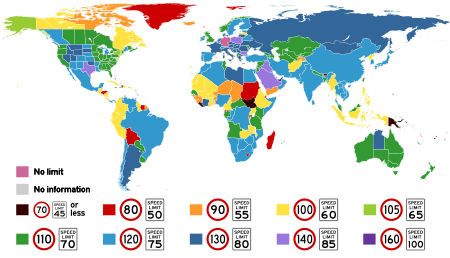 Map of highest-posted speed limits around the world. Note: TheUK and US use mph ("SPEED LIMIT xx"); elsewhere km/h (in circle). (Click to enlarge)

All content from Kiddle encyclopedia articles (including the article images and facts) can be freely used under Attribution-ShareAlike license, unless stated otherwise. Cite this article:
Speed limit Facts for Kids. Kiddle Encyclopedia.