Workington is a town, civil parish and port at the mouth of the River Derwent on the west coast of Cumbria, England. Historically in Cumberland and lying in the Borough of Allerdale, Workington is 32 miles (51.5 km) southwest of Carlisle, 7 miles (11.3 km) west of Cockermouth, and 5 miles (8.0 km) southwest of Maryport. At the 2011 Census it had a population of 25,207.

Workington is the seat of Allerdale Borough Council. Sue Hayman is the MP for the constituency of the same name that includes other towns in Workington's hinterland.

The area around Workington has long been a producer of coal and steel.

Between AD 79 and AD 122, Roman forts, mile-forts and watchtowers were established along the Cumbrian coast. They were coastal defences against attacks by the Scoti from Ireland and by the Caledonii, the most powerful tribe in what is now Scotland. The 16th-century Britannia, written by William Camden describes ruins of the coastal defences at Workington.

A Viking sword was discovered at Northside, which is believed to indicate that there was a settlement at the river's mouth. 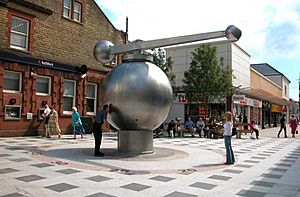 In 2006, Washington Square, a £50 million shopping centre and 275,000 sq ft (25,500 m2) mixed use complex, was opened to replace the run down St John's Arcade, built in the 1960s and 70s. In 2007, the Royal Institution of Chartered Surveyors named Washington Square as the 'best commercial project' in North West England.

Several works of public art were installed in the town centre, including:

While successful efforts have been made to find appropriate local names for the major streets of the new shopping centre, the initial planning title of Washington Square has been retained; there is concern over the use of the word Washington, an Anglo-Saxon word meaning the settlement of the people of 'Wash' for the new square in Workington, which means settlement of the people of 'Weorc'.

All content from Kiddle encyclopedia articles (including the article images and facts) can be freely used under Attribution-ShareAlike license, unless stated otherwise. Cite this article:
Workington Facts for Kids. Kiddle Encyclopedia.