Alton is a village in Staffordshire, England, The village is noted for the theme park Alton Towers, built around the site of Alton Mansion, which was owned by the Earls of Shrewsbury, and designed by Augustus Pugin. In the 1914 map by Whiston, there were copper works in the village.

The village is on the eastern side of the Churnet. It is mentioned in the Domesday Book, and contains numerous buildings of architectural interest; the Round-House, Alton Castle (now a Catholic youth retreat centre), St Peter's Church, The Malt House, St John's Church and Alton Towers.

Alton was served by the Alton railway station which was opened by the North Staffordshire Railway on 13 July 1849 and closed in the 1960s.

The Chained Oak in Alton has been made famous by the ride Hex – The Legend of the Towers at Alton Towers and the legend involving the Earl of Shrewsbury. 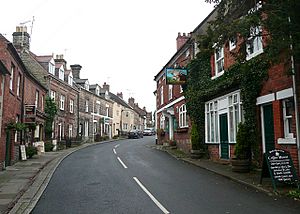 All content from Kiddle encyclopedia articles (including the article images and facts) can be freely used under Attribution-ShareAlike license, unless stated otherwise. Cite this article:
Alton, Staffordshire Facts for Kids. Kiddle Encyclopedia.