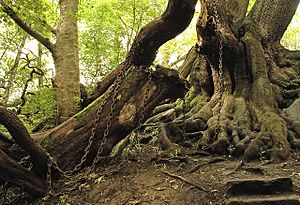 The Chained Oak is an oak tree, tied in chains, near to the village of Alton, Staffordshire, England. The tree, referred to as "The Old Oak", is the subject of a local legend involving the Earl of Shrewsbury and an old beggar woman. It is located on a public footpath to the left of the Chained Oak B&B.

The legend was adapted and fancifully elaborated to form the back-story for the ride Hex – the Legend of the Towers at the nearby Alton Towers theme park.

On an autumn night, the Earl of Shrewsbury was returning to his home at Alton Towers when an old woman suddenly appeared in the road ahead of his horse and coach. The coach stopped to find why she was there at which point the old woman begged for a coin. The Earl cruelly dismissed her, so the old woman stated that she would place a curse on him. The old woman told the Earl that for every branch on the Old Oak Tree that fell, a member of the Earl’s family would die. The Earl refused to listen and continued on his way.

That same night, a violent storm caused a single branch from the old oak tree to break and fall. Later that evening, a member of the Earl’s family suddenly and mysteriously died.

Now firmly believing in the power of the curse, the Earl is said to have ordered his servants to chain every branch together to prevent other branches from falling. To this day, the Oak tree remains chained up.

There are slight variations in the story, however the core remains the same.

On 9 April 2007, one of the tree's main branches fell off. The Talbot family confirmed that no one died when the branch fell.

Since then, a considerable proportion of the chained oak has collapsed. It is thought that one of the chains, having become integral to the tree's structure, rusted through resulting in the collapse of part of the lower side of the tree.

Various dates are attributed to the legend of the chained oak, affecting the identity of "The Earl".

The 16th Earl is remembered as "Good Earl John" for his charity, having supported local schools and churches, and financed the construction of new Catholic chapels around the Midlands, including in the village of Alton where he also built almshouses for the poor and elderly. His reputation does not seem to fit that of the Earl in the legend.

The 15th and 16th Earls of Shrewsbury built and then extended Alton Towers and its gardens. During their tenure, thousands of new trees were planted, but the old trees were "greatly prized". The Chained Oak was situated in a highly visible" position, "just off a carriage-way" frequently used by the Earls. As such, the tree may have been wrapped in chains simply to preserve it, and prevent it from collapsing under its own weight.

All content from Kiddle encyclopedia articles (including the article images and facts) can be freely used under Attribution-ShareAlike license, unless stated otherwise. Cite this article:
Chained Oak Facts for Kids. Kiddle Encyclopedia.