Kids Encyclopedia Facts
This page is about the town. For other uses, see Biddulph (disambiguation).

Biddulph is a town in Staffordshire, England, 8.5 miles (14 km) north of Stoke-on-Trent and 4.5 miles (7 km) south-east of Congleton, Cheshire.

Biddulph's name may come from Anglo-Saxon/Old English bī dylfe = "beside the pit or quarry". It may also stem from a corruption of the Saxon/Old English Bidulfe, meaning "wolf slayer", and as a result the Biddulph family crest is a wolf rampant.

In the days of coal and iron, Biddulph was actually called Bradley Green, the original site of Biddulph being the area in which the parish church, Grange House, and the ruins of Biddulph Old Hall stand. It was not until 1930 that the town was marked on Ordnance Survey maps as 'Biddulph'.

The hamlet of Brown Lees is located in the south of Biddulph civil parish.

The supermarket chain Sainsbury's opened a new store in Biddulph in November 2010.

In addition to the supermarket development, a number of derelict and semi-derelict buildings are currently being refurbished or rebuilt by the local Councils and private owners. These are in line with the intentions set out in the Town Centre Area Action Plan (2007), which aims to reverse the spiral of decline that has threatened the long-term viability of the town centre since the early 1990s.

A new 3000 square metre primary health facility for the North Staffordshire Primary Care Trust is also planned for the town centre as part of the ongoing regeneration and investment programme.

A new cafe for youngsters, 'Biddulph Young People’s Place' opened in March 2011 at Kingsfield First School after a year of planning and fund-raising.

In 2011 Biddulph, which has a population of approx. 20,000, was left without a post office for 4 months when the small supermarket in which it was situated closed down. A temporary Post Office was eventually set up in the town hall car park.

A new Post Office has since been opened in October 2013 at the northern end of Biddulph High Street.

Biddulph had its railway station opened by the North Staffordshire Railway in 1864. The station was on the Biddulph Valley Line that ran from a junction just north of Congleton on the Stoke-on-Trent – Macclesfield line to a junction south of Stoke-on-Trent station. Passenger traffic was withdrawn from the station on 11 July 1927, but freight traffic continued until 5 October 1964. There was also a canal rail interchange at Congleton Junction. The remains of the small dock on the Macclesfield Canal can still be seen. The station remains in situ and the platforms as a private residence. With the trackbed forming the Biddulph Valley Way.

Biddulph is located on the A527, which links it with Congleton in the North and Stoke-on-Trent in the south.

D&G Bus provides bus services to Hanley (No.9) and to Leek (No.93) and the No. 94 goes north to Congleton and south to Tunstall and Newcastle-under-Lyme 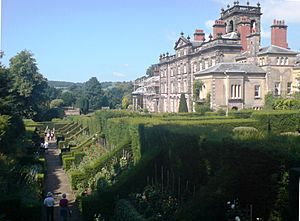 Within the bowl created by the ridges of Mow Cop and Biddulph Moor, there are ancient burial mounds; evidence of the English Civil War; the bubonic plague; Black Bull Colliery; tombs of possible Crusader knights; an Iron Age fort; and the site of a meeting of the Methodist movement with the Wesleys.

Biddulph is also home to the Biddulph Grange, a house and landscaped gardens owned by the National Trust.

In common with other parts of the area administered by Staffordshire LEA, the Middle School system operates in Biddulph. 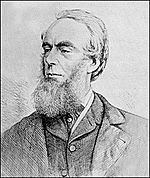 All content from Kiddle encyclopedia articles (including the article images and facts) can be freely used under Attribution-ShareAlike license, unless stated otherwise. Cite this article:
Biddulph Facts for Kids. Kiddle Encyclopedia.