Rowley Regis is a historic parish and former municipal borough, in the Black Country region of the West Midlands, England. Considered one of the six 'towns' that comprise the modern-day Sandwell Metropolitan Borough, it encompasses the wards of Blackheath, Cradley Heath and Old Hill, and Rowley Village. At the 2011 census, the combined population of Rowley Regis was 50,257.

The history of Rowley Regis began in the 12th century, when a small village grew around the parish church of St. Giles, approximately two miles south-east of the town of Dudley. Rowley was part of the Royal hunting grounds - Regis was added to the name of Rowley in around 1140 to signify it was that part of Rowley belonging to the King. It began to develop substantially between the two world wars, when thousands of privately owned and local authority houses were built in the surrounding area. During that time Rowley Regis became a borough, and incorporated the communities of Blackheath, Old Hill, and Cradley Heath. These places were all within the ancient parish of Rowley Regis, which (despite being in the county of Staffordshire) was in the diocese of Worcester. The parish contained the manors of Rowley Regis and Rowley Somery, the latter being part of the barony of Dudley, but the extents of these manors and the relationship between them are not clear.

The present St. Giles Church on Church Road is not the original church in Rowley Regis. It was designed by Holland W. Hobbiss and A. S. Dixon, and was built in 1923. The previous church, built in 1904, was burned down in 1913, some believing the fire to have been started by Suffragettes or local striking steelworkers; this however is supposition and it was more than probable it was a simple accident, the church at this time using parrafin as a means of lighting and the latter perhaps causing the fire. . The second church, built in 1840, was found to be unsafe and condemned in 1900. 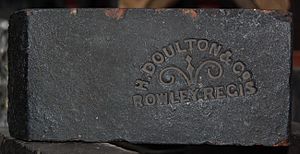 Brick made by H Doulton & Co. of Rowley Regis, displayed in the Black Country Living Museum

Rowley Regis railway station opened in 1867 in the south of the then village, and remains in use to this day.

Rowley's grammar school was opened on Hawes Lane in September 1962. Well-known former pupils include Pete Williams (original bass player with Dexys Midnight Runners), and actress Josie Lawrence. In 1974, when comprehensive schools became universal in the new borough of Sandwell, the grammar school became Rowley Regis Sixth Form College, the last intake of grammar school pupils having been inducted the previous year. In 2003 it became an annexe of Dudley College, but this arrangement lasted just one year before the buildings fell into disuse. It was demolished three years later, and the site was redeveloped as the new Rowley Learning Campus under Sandwell's Building Schools for the Future programme, comprising St Michael's Church of England High School, Westminster Special School, and Whiteheath Education Centre, which opened in September 2011. 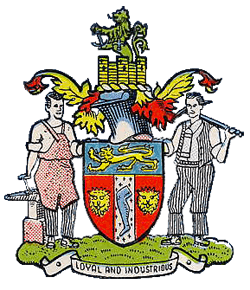 Coat of Arms of the former Rowley Regis Municipal Borough

Originally in Staffordshire, the Rowley Regis Urban District was formed in 1894 to cover the villages of Rowley, Blackheath, Cradley Heath, and Old Hill. The urban district was incorporated into a municipal borough in 1933. Following the acquisition of borough status, plans were unveiled to build new council offices in the borough to replace the existing offices in Lawrence Lane, Old Hill. A site on the corner of Halesowen Road and Barrs Road was selected, with working commencing in October 1937, and the building being completed in December 1938.

Following the demise of Rowley Regis as a standalone borough in 1966, the council offices in Barrs Road were retained by Warley council and then by Sandwell council. However, a plan was submitted in July 2012 by Sandwell Leisure Trust to demolish the buildings to make way for an expansion to the neighbouring Haden Hill Leisure Centre, and the development of a new fire station.

The archives for Rowley Regis Borough are held at Sandwell Community History and Archives Service. 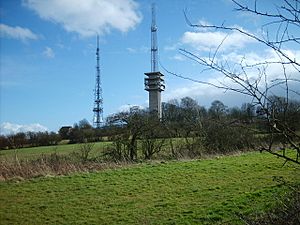 Turner's Hill, the highest point in the West Midlands

Rowley Regis is the location of the Rowley Hills, famed for the quarrying of Rowley Rag Stone. The hills form part of the east/west watershed between the rivers Trent and Severn, and contain the highest point in the West Midlands region, Turner's Hill, at 269m above sea level.

All content from Kiddle encyclopedia articles (including the article images and facts) can be freely used under Attribution-ShareAlike license, unless stated otherwise. Cite this article:
Rowley Regis Facts for Kids. Kiddle Encyclopedia.