In 2017, after undergoing a large scale regeneration project, the Arboretum's new award-winning Remembrance Centre was officially opened by the Duke of Cambridge on 23 March. Featuring three new exhibition galleries, larger restaurant and shop, separate coffee shop and a courtyard with garden, it provides visitors with facilities fitting that of a large scale visitor attraction.

The idea for the Arboretum was conceived by Commander David Childs CBE in 1988, who wished to establish a national focus or 'centre' for Remembrance. Following a meeting with Group Captain Leonard Cheshire VC, an appeal was launched in 1994 by the then Prime Minister, John Major. He believed that the Arboretum would form a living tribute to service men and women for future generations to reflect upon and enjoy.

The future of the project became assured when three proposals were agreed. These were: for the site to be the location of the Armed Forces Memorial; for the Ministry of Defence to pay a significant grant-in-aid to allow for free entry and that The Royal British Legion would accept the gift of the site as the focus for the Nation's year-round Remembrance.

The project began with no money, no land, no staff and no trees. The National Lottery, in the form of the Millennium Commission, granted some forty per cent of the funds needed and this was matched by thousands of donations, both large and small, from a wide variety of organisations both military and civilian, men and women, corporate and voluntary.

Planting began on the reclaimed gravel workings, bordered by the Rivers Trent and Tame, gifted to the charity by Lafarge in 1997. The initial planting took place thanks to grants from the Forestry Commission and the National Forest, and since then has been shaped by a staff of thousands: a small paid group; a dedicated and active Friends of the National Memorial Arboretum organisation; and countless others who have either planted individual trees or helped create a memorial for their organisation.

The Arboretum was officially opened on 16 May 2001. It is a registered charity and is part of The Royal British Legion family of charities. 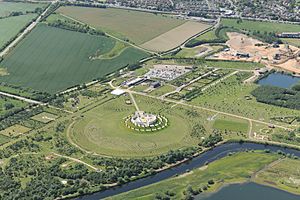 The Arboretum is situated just south of Alrewas on approximately 150 acres (61 ha; 0.23 sq mi) of old gravel workings, 5 miles (8.0 km) north of Lichfield, Staffordshire. It is adjacent to the confluence of the River Tame with the River Trent, and directly neighbouring Croxall Lakes. It is at the western end of the National Forest, just off the A38 road. 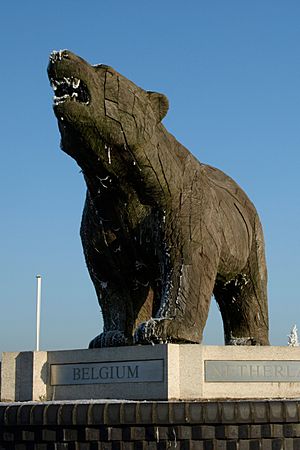 The Polar Bear Memorial was the first memorial dedicated on site, on 7 June 1998.

The Arboretum contains 30,000 trees, with more being added each year. There are more than 350 memorials for the armed forces, civilian organisations and voluntary bodies who have played a part in serving the country; and even HMS Amethyst's cat Simon.

At the heart of the Arboretum is the Armed Forces Memorial, which is a tribute to over 16,000 service personnel who have lost their lives in conflict or as a result of terrorism since the end of the Second World War. At 11 am on 11 November each year the sun shines through two slits in the outer and inner walls of the memorial, casting a shaft of light across a wreath in the centre. The Armed Forces Memorial was dedicated in October 2007 by the Archbishop of Canterbury in the presence of the Queen.

Other areas of the site include an RAF 'wing', Naval review and Army parade. Civilian areas include 'The Beat' which contains memorials and dedications to police forces from around the UK and commonwealth.

Within the Arboretum is the Millennium Chapel of Peace and Forgiveness where, at 11 am each day, an act of remembrance takes place. Following the two minutes silence, accompanied by the Last Post and Reveille, there is an introductory talk about the arboretum.

Daily Activities on site include guided walks, buggy tours, Land Train rides and free talks, as well as the Daily Act of Remembrance. Most of these activities are conducted by a team of over 260 volunteers, who collectively dedicate more than 52,000 hours of their time per year to the Arboretum. In 2010, the Volunteers of the National Memorial Arboretum were awarded The Queen's Award for Voluntary Service.

Some of the other features of the National Memorial Arboretum are described below.

All content from Kiddle encyclopedia articles (including the article images and facts) can be freely used under Attribution-ShareAlike license, unless stated otherwise. Cite this article:
National Memorial Arboretum Facts for Kids. Kiddle Encyclopedia.