No man's land facts for kids 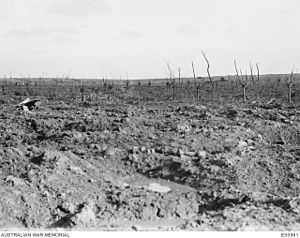 "No man's land" between German and Australian forces during World War I. 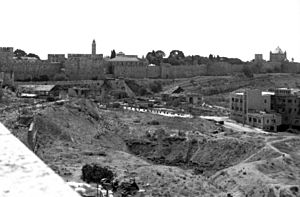 No man's land in Jerusalem, between Israel and Jordan, about 1964

No man's land is land that is not part of any country. It may be unclaimed territory, or an area that is under dispute and not occupied because of fear or uncertainty.

During war (especially World War I), it is a term used for the area of land between two enemy trenches. Usually nobody was alive there. It was full of shell holes, dead bodies, and barbed wire, and raked by machine gun fire. Attacks were made across no man's land but few attacking soldiers survived.

All content from Kiddle encyclopedia articles (including the article images and facts) can be freely used under Attribution-ShareAlike license, unless stated otherwise. Cite this article:
No man's land Facts for Kids. Kiddle Encyclopedia.