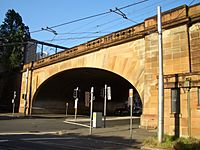 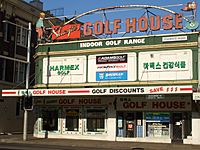 Central is an urban locality around Central railway station in Sydney, New South Wales, Australia. It is located in the Sydney central business district and is part of the local government area of the City of Sydney. The locality is in the inner-city suburbs of Surry Hills and Haymarket and is close to Chinatown. The postcode is 2000.

All content from Kiddle encyclopedia articles (including the article images and facts) can be freely used under Attribution-ShareAlike license, unless stated otherwise. Cite this article:
Central, New South Wales Facts for Kids. Kiddle Encyclopedia.